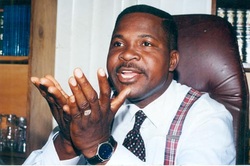 Mike Ozekhome
A telephone call from Nigeria early today says there is a report that Mike Ozekhome may have been freed by kidnappers in Nigeria. He was reportedly kidnapped about two weeks ago in Edo State area of the country.
What can be deduced from calls for the lawyer's release is seeming approval of the kidnappers' act as a demonstration against bad governance, warranting calls to the kidnappers to release the lawyer who has been part of the struggle against bad governance.
Only one person has called for the release of another guy kidnapped with the lawyer and the call for the release of the lawyer's driver, also kidnapped with him ,has been mute.
Issa Adidi, speaking on behalf of demonstrating youths who hail from Ozekhome's birth place said that he is a good man, and he has been on the side of the downtrodden. “We are not giving ultimatum to the  kidnappers, but we are appealing to them for him to be released unconditionally.” the Punch news online reported.
Matthew Kukah, Catholic Bishop of Sokoto was reported that he described the kidnap of the human rights activist as shocking and “too much punishment for someone who has sacrificed so much for the country.” “I beg the abductors, for God’s mercies and for the peace of the souls of those
gallant police officers, who surrendered their lives, to release the victims.”
Similarly, human rights lawyer, Mr. Bamidele Aturu, said on Tuesday that Ozekhome deserved no harm. Aturu, in a statement, pleaded with the
abductors to release Ozekhome, who he said, had made significant contributions towards achieving a decent society.
Femi Falana, a front line activist and lawyer said, “Since the Nigerian state has demonstrated,  over and over again, of its incapacity to protect the  lives and property of citizens and aliens living in our country, I am compelled to appeal to the kidnappers to release Chief Ozekhome  without delay.
Kidnappers are lawless brigands who should not have a role in a country under the rule of law, but thrive in a land where law and order have broken down. Else, observers say, appeals should be directed to the law enforcement to ensure the safety of the citizens.  But they say the Nigerian Police, like power supply organization that gives more darkness than light, is a power unto itself.
The order day, mother of the country's finance minister was kidnapped, and the office of the president intervened to ensure the old woman was recovered alive.  People are saying that if all citizens are equal under the law, if the presidency could intervene to save the minister's mother, it should swing into action by directing the police to go after Ozekhome's kidnappers to ensure  that no harm comes upon the lawyer and others held with him. Aside from this, people ask the nation's law makers to look into kidnappers' operations in the country and make a law that will be enough deterrence to the menace.