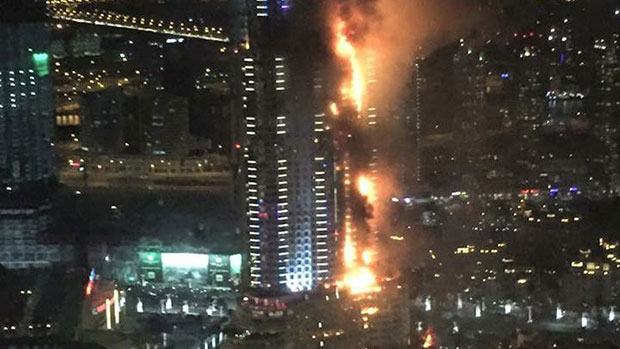 The fire at the 63 story hotel building complex in Dubai on Thursday, few hours to the new year, was huge and troubling. And people are thanking God following a news report that there are no casualties in what is now considered as an end of the  year  miracle.
Yes, news report said there were no casualties, and news report ascribes the safety of residents to quick intervention of first responders the quick evacuation. About 100 residents were reportedly evacuated.
The size of the fire and the way it extended to the upper floors was scary and one could fathom the scariness from the anxiety and the questions the news anchor asked the specialist interviewed as the fire raged.
"Can this be linked to terrorism?"
"No. It is too early to say that. We have to wait for the outcome of investigations to determine what may have been the cause of the fire."
Another worry and question was about those who may have been caught up in the hotel's upper floors by the fire and how they would be helped to escape. Are there no automatic fire pumps in the hotel and if so how has the fire managed to become so big without no sign of putting it down before turning into an inferno? But as the anxiety mounted and increased, an announcement that came first that there was no one injured calmed nerves, showing the importance attached to human lives and safety.
However, days after the fire has been put out, the smoke is reported as not completely out and that the authorities said that it is still working to ascertain the cause of the fire. But there is silence on the extent of damage the fire may have caused in the hotel.
Truly, fire fighters and police in Dubai had fought gallantly to save lives and have helped humanity avoided a tragedy at that time of the year, when people were preparing for celebratory fire works. Notwithstanding the miracle that lives were saved in the hotel, some people are still sacred of getting to stay in a hotel so high, believing that saving lives there amid that type of inferno must have been a miracle.
HTML Comment Box is loading comments...
NEWS AND FEATURES
News & Features Around The World