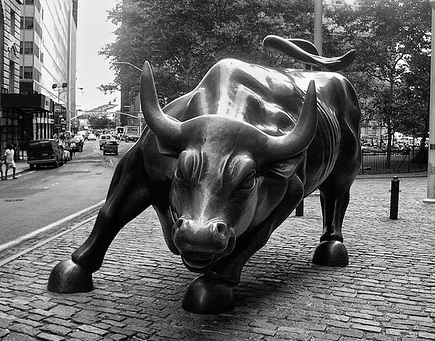 The Bull
We work to earn money to meet our needs. Some people are fortunate to have tons of money to meet their needs, while others are not so fortunate. People who know how hard life is struggling with insufficient money understand the reason those who possess tons would want to have more, than see their monetary possession diminish. The rich wants to have more and the poor wants to be rich, because of the power that money confers. Thus money has become a magnet no human can avoid, and has remained humans' only means of exchange internationally, since the day that trade by batter was displaced.
The use of money represents something good that doesn't suppose to connote evil, at least it has helped ameliorate the difficulties associated with trading by batter. Many people believe that money has power to save and to destroy. They say that having too much of it makes one to lose control of one's true self-worth, to want enslave others without knowing it and that it makes one loses sense of reality. Therefore many people will prefer to be comfortable than be rich. Unfortunately no one has control of how much money to possess.
This may explain why some people are rich beyond their imagination and others are poor and lack enough to meet their needs.
The result of this disparity between the have and the have not is a world of inequality. It seems natural and that there is little anyone can do about it than to consistently ensure amelioration of the hardship that poverty causes. There are countries that are rich with so much natural resources and yet with large number of people who are poor and few rich people. Some countries lack natural resources and yet they have managed the few resources and built infrastructure that make life easier for the people.
It is here that money and judicious management of money conflate. It is here too many people look at some rich people and countries lacking in judicious use of money as 'money miss road.' It means the possibility of having money and unaware how to maximize its use for self and society's benefit. It is what has made the services of the financial industry a huge benefit to humanity. It is what has also made the Wall Street in New York relevant to America, its wealthy class and the society.
It is also what makes understanding the words of God relevant to making people in political power know the reason they are in office. Martin Luther King proved it as a Baptist minister in the United States with the protests he led against marginalization of the poor, which resulted in the institutionalization of aid programs in the '60s, which people enjoy today and the same had made Luther an unforgettable name. The use that governments in advanced countries like the U.S have put money for the benefit of the society is a good example of how money can be used to demonstrate its judicious power.
It means that having money itself does not confer power and respect, but how the money is put into use. Everyone has the right to seek money by working for it aggressively as symbolized by the bronze Bull on Broadway, Downtown Manhattan in New York near the Bowling Green station and a notable place of visit for tourists. It cannot be an accident that the Bull, which sources say represents aggressive financial strength or the power of the American people is located in the financial district, the heart of the profession of money management and how to maximize its benefit.
Click to set custom HTML
Comment Box is loading comments...
NEWS AND FEATURES
News & Features Around The World