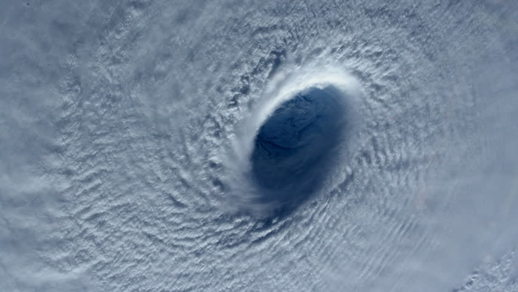 The eye of the monster
Over 300 people died in Sierra Leone from mudslide caused by one night of heavy rainfall.
​  The world had hardly recover from the impact of Sierra Leone loses, when Hurricane Harvey intruded into Texas, flooded Houston and suburban areas with mass of water, and turned the areas into an ocean.
Understandably it is the hurricane season, when the monsters come from the waters and bring lots of waters with them, turning human lives on their paths upside down. The season has become for humans a season of suffering and deprivation.
It shows the inhuman aspect of the hurricane and its appetite for human destruction without blinking of eyes. Though not humans, but it is called a human name. And that has not changed its animalistic and monstrous tendency.
One aspect of hurricane's life is the reason for their departure from their homestead. Is the departure to land in human neighborhoods a mark of death or do they return to their homestead after visiting destruction on humanity?
Manifestly hurricane is a sea monsters that is invisible to human eyes. We only see it coming as ferocious wind capable of taking down or uprooting anything on its way. The speed it travels shows on the trouble it brings upon the waters, with its eye rolling in such a manner one cannot mistaken that such unstable eye cannot see, and the reason it is unable to distinguish humans from inanimate objects, and just destroys everything and leaves people in ruins.
Hurricane, like Tornado, is merciless. Because they have not been equipped with faculties to see the evil they bring with them. They cannot differentiate between good and bad. If they can, they certainly will see the damage done to human infrastructure, loss of precious lives and the cost of maintaining sanity in the system to keep them from ruining humanity completely.
Despite the enormous cost of protecting various facilities to keep humans safe from hurricane's death path, its  yearly evil visitation cannot be stopped or avoided. It is an unwanted visitor humans have no power to reject. Of course, more hurricanes are expected this season, just like Harvey.
Harvey has done its damage in Houston. Houston residents will pray never to have a repetition. All the states on the coast will be getting ready for any unwelcomed visit whenever the path of a hurricane travels their ways. In the language of hurricane, mandatory evacuation has become part of the system.
Whenever there is a hurricane and the authorities say that there is a mandatory evacuation to avoid the trouble the hurricane is bringing, humans ought to have learnt a lesson that it is better to evacuate, so that we don’t become victims to be plucked from tree tops or roofs and the floods.
Hurricane will do its damage, vanish into the thin air and leaves the country to face the challenge of rebuilding, and wait for another monster to come in toe. When hurricane travels, it travels with tornado in toe as tornado warnings have manifested in Houston, as the city struggles with the deluge of water.
Compared to the Sierra Leone experience, the death of 10 people in Texas deluge as reported in the news, shows how fortified Houston is for the safety of residents.