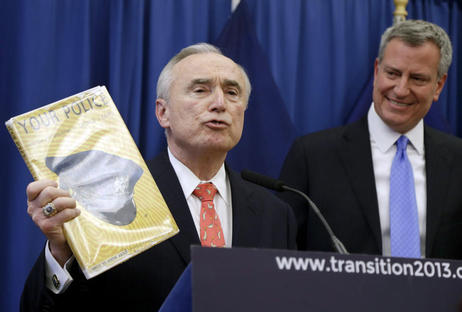 De Blasio and his new police commissioner
Everyone is always on the move confirming the philosophical saying that nothing is ever permanent. No weather can stop people from moving from their home to work and back to the house from work. The trains and the buses are always busy moving people; the taxis, the limousines and the horses. The airplanes and the ships too; they move because people are always on the move.

Michael Bloomberg has been the mayor of New York for 12 years, but now he is moving to allow De Blasio take over from him. Bloomberg is not just moving away from the mayor’s office; he is already moving around the five boroughs thanking new Yorkers for allowing him to serve them for 12 good years.

It is not only Bloomberg that is moving. De Blasio is also moving. The news says that the new mayor has chosen to move from his personal home in Brooklyn to the Gracie Mansion, the mayor’s official residence. People say it is where he should be, because it is the reason the people has provided the home and it should be allowed to waste for any reason.

Yes, the police commissioner, Ray Kelly is also moving. He is moving from the office of commissioner to begin a talk show, not on television but a sort of talk show that will in form of seminars to teach people of what he has learnt over the years that he has been keeping New York - the world’s mega city - safe.