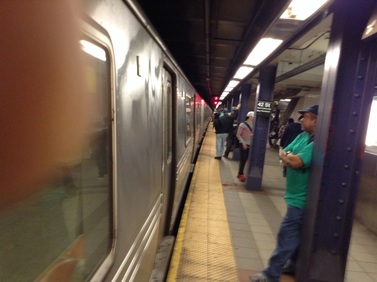 A train suddenly stops and unload its passengers without explanation
An 'A' train arrives at the 42 Street station on the express lane. Straphangers who have waited for a train to arrive heave a sigh of relief and step into the train. The train waits. There is no announcement. Then, all of a sudden, an announcement says everyone should step out of the train, because the train's trip to that station is its last trip. No more reason is given as for why the trip is the train's last trip.
Helpless straphangers step out of the train. The train's officials go from car to car to ensure no passenger is left on the train. In the course of the checking, they discover a light complexioned guy sitting and half asleep on the train. They attempt waking the guy up from slumber. But the guy is not ready to get off the train, when they finally succeed getting his attention. He tells the train officials, half awake and half asleep, that  he is not at his destination yet.
And because the guy is adamant that no one would force him out of the train halfway to his destination, the officials call on the radio for the transit police. A young man in a pair of light blue jeans and a vest steps up and so is another lady dressed in almost the same fashion like the man, to help the train personnel get an unwilling passenger off the train. The man and the lady in jeans use psychological approach to get the passenger sit up and the passenger is seen tying up his knicker that is almost falling off.
As the passenger tidy up his knicker, he walks from seat to seat - picking up what belongs to him - that are scattered all over. There is a tooth brush and tooth paste being tucked into a nondescript bag. Meanwhile, the train's doors come to a close. The door the passenger has chosen to use to get off the train dramatically comes  to a close and he finds it difficult to turn round to use a single door that is left open behind him. It takes the guy in jeans and vest to shout at the passenger to turn back and use the single door that is open.
The passenger is finally out of the train. But the question remains as why the train decides to end that trip and put leaves its passengers stranded without explanation. Many of these passengers are on their way to work or from work. Those going to work may be running late and those returning home have the right to get home in time to sleep. Leaving them midway their journey without explanation is the most uncharitable thing one will expect from an organization like the MTA.
Is that the way the MTA personnel have been trained to treat the public? Doesn't the MTA's Relations office give etiquette training to its personnel on how to treat their passengers? Does these train personnel know that proceeds from ticket these passengers buy pay their salaries and allowances and keep the MTA running? Don't they know the passengers need be treated with courtesy? As you ask these questions, the train kick start its engine that has been relaxed and zooms off to nowhere.
Stranded passengers and others waiting for a train that has refused to come wait for another 20 minutes before an E train emerges on the same express lane that the A train has vacated. The time is 0635 a.m. and those going to resume work at 0700 are running late. If the A train personnel have not asked everyone to get off the train at 0635 a.m, when the train personnel announced its sudden last trip, most of the workers on the train going to resume work at 0700 a.m would have made it to work on time.
It is not the first time this reporter has run into delay train service on the A, C and E train track on the 42nd Street. He was rushing to work the first time and early morning too at about 0630 a.m and he waited at the station for upward 25 minutes before a train eventually emerged from the tunnel, making him late to work. Many others going to work that morning must have been affected the same way. Buses and trains are supposed torun to schedule.
When buses and trains don't run to schedule, the situation leaves people going work in jeopardy and psychological wreck. We all know this is capable to affect relationship between leaders and followers and efficiency at work. Most importantly, the MTA needs to treat its customers with respect and not like chattels, to be picked and dropped off halfway their journey without justifiable explanation. The MTA is now synonymous to day and night repair works on the tracks it use as excuse for its delay service, endless raising of fares and continuously begging for money from the city.
People are already saying that the manifest inefficiency in the MTA's service may be a reflection of the inefficiency of its top administrators, and that the city needs to weed off officers whose work attitude is affecting the organization and which may eventually result to holding the city back from progress.
HTML Comment Box is loading comments...
NEWS AND FEATURES
News & Features Around The World