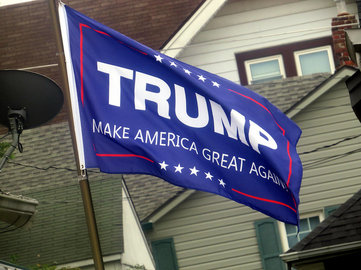 Press ahead and don't allow the noise from the mammoth opposition from the right and the left wing politicians and their cronies distract you.
Politicians on the right and left will do anything to want to bring you down, because you are the 'other', whom they don't want in the race and least to say they want you as president.
You are the outsider they hate to see emerge as a candidate or give their anointed candidate a challenge they least expect. Don't listen to them. Listen only to your followers in the movement that has arise from your genuine efforts. These Americans are genuine American voters and who have been supporting you from the beginning of the race.
Doubting Thomases said you were not eligible to be a candidate and said unprintable things about you as if they were POPES, but you defeated them and their candidates, because the voters were on your side.
Anytime I read the polls' results, I see that you are doing great against your major opponent and herself has made the remark about why has she not been leading with 50 points.
Remember that Journalists or reporters in the right and the left wing media each has one vote and they cannot determine who becomes the next president of the United States, especially in these days that the public has many accesses of information, and the public can no longer be influenced by warped political minds masquerading as specialists.
Let those asking you to drop out of the race first drop out of life for the frustration of seeing you on your feet against their wish. Their noise that you lost so much in business in 1995 and that you may not have paid any tax since then (legally) shows that you have benefited greatly from the system (legally), and you want to give back.
You have my support, despite their current noise about a statement credited to you 11 years ago about sexuality. You were not in the White House when you said it. You were not a professional politician. You were never caught having sex in your office with any of your employees or candidates for the Miss Universe Pageant. You have my support because I love your fighting spirit.
You have better morals than your accusers. My choice for you is for you to stay and remain in the race and let voters decide your fate. Voters decided your fate in the primaries, when you traveled trough states across America, winning and winning. Please allow these same voters to speak with their votes in the general election.
Many professional politicians are already living with fear of Trump's presidency and they would do anything with their paid PR officers in media houses to truncate your campaign, while they give their candidate free passes. Observers know that they are working behind the scene, looking for means to take you out and take the decision away from voters, but as a true democrat in a democratic country, it is better to allow voters play their role.
If you were the candidate who survived fainting in the public twice, their PR officers would have described you as unhealthy and unfit for office. If you were the one with a mountain of email problems and saying falsehood as representation of the truth, you would have been sentenced to hang in their court of public opinion.
Don't allow them to scuttle the good fight you have started. Continue the fight, a good fight to make America great again! Don't surrender and don't believe the polls they rush and do after each of their efforts to drag you out with force. The decision to elect a president belongs to voters and not the politicians or their surrogates.
NEWS AND FEATURES
Photo used under Creative Commons from kennethkonica
News & Features Around The World