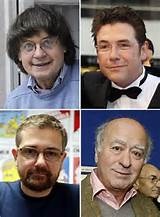 Four of the cartoonists killed in Paris attack
While the police in France are working to arrest the terrorists who have killed journalists and policemen in the country, discussions will continue on the new danger journalists face on the job. The signals of the new danger emerged with the beheadings of James Foley and Steven Sotloff in Syria by the ISIS terrorists.
The difference between the beheadings of the two American journalists in Syria and the attack on Charles Hebdo was that some observers considered Foley and Sotloff as victims of a war - and their killing as indirect declaration of war on journalism by terrorists. And that the ISIS used the American citizenship of Foley and Sotloff as a cover to indirectly attack the Fourth Estate, unlike what happened in Paris - an outright declaration of war against the Fourth Estate.
A newspaper office came under direct attack by armed gun men. They killed the editor-in chief and 11 staffers, because of what news reports described as the newspaper's decision to exercise freedom by publishing what it deemed fit, based on its news and editorial judgment, against the terrorists' wish to remotely edit the newspaper for the editors. The editors rejection of terror to influence their news and editorial judgment led to an attack and death on the job.
Reports said that the editor who got killed had an armed guard, undoubtedly a realization of the danger he faced reporting stories he may have known angered a section of the public or a result of threat and pressure for him to drop publishing materials that terrorists viewed as against their human god. It is the first time it is heard of an editor in a news room meeting with an armed guard watching over him for his safety and that helps to confirm the new danger journalists face on the job.
The Paris attack again calls public attention to the fact that it is not only in war zones that journalists can be attacked. They are under attack everywhere - in their homes, in their offices and in battle fronts. Apparently, the war between terror and the western culture arising from terror attack on the West has raced the stake against journalists' freedom, just as it has raced the stake for other countries around the world that have chosen to freely follow the Western culture.
Journalism has always been viewed as a dangerous profession by practitioners and the society, because of the conflict between practitioners and people in public authority. Happily today, people from all works of life - including people in public authority - have condemned terror attack on the freedom of expression.