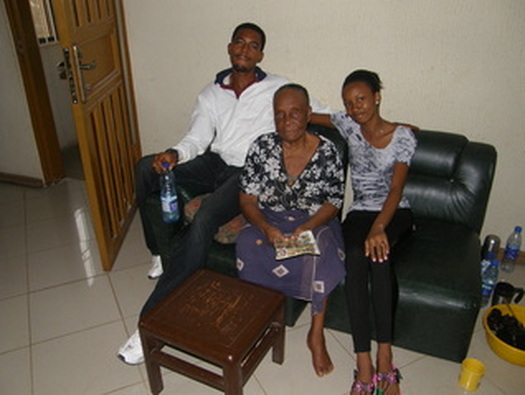 Ayiyi (middle) with 2 of her grandchildren.


Ayiyi Musa Giwa, mother of the Nigerian slained journalist, Dele Giwa,
killed by a parcel bomb on 19 October 1986, died today in a Lagos hospital.
She was aged 87.
She is survived by 5 children, many grandchildren and great-grandchildren,
among them are her oldest surviving child, Olatunde Giwa who lives in Spain
and Abiodun Giwa, publisher of Global Pentorch.
Abiodun saw his mother in June 2012 during a short visit to Nigeria,
purposefully to see his mother after 10 years in the United States.
Ayiyi's death marks the end of a cycle and struggle for survival after the
assassination of her first and eldest child 27 years ago. Her surviving children
believed it was a miracle she survived her son's brutal assassination for 27
long years.