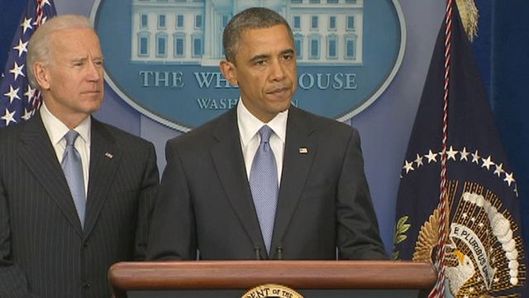 With 257-167 votes, America temporarily avoids the cliff and the dangers, but not without massive tax hikes and work ahead for spending cuts. It explains  the reason for President Barack Obama's grim look during a press conference.
Before and during the negotiations, Americans who know the meaning of a cliff wonder what it has to do with the country's fiscal situation and why it has to be associated with it. Having been relating with recession, the new terminology of financial and economic fiscal cliif evokes fear that most people prefer to discard its thought, leaving the matter to Washington politicians and the press to resolve. It was why through Christmas, many Americans still wondered why Washington politicians embarked on holidays and left the cliff behind if it was that dangerous to the nation's economic health.
Thus on arrival from holidaying, the president went on a press conference, ripped GOP Congress members and said, "Americans cannot afford the cliff, the nation cannot afford it and the economy cannot afford it," seemed like a nightmare to many.  Many Americans' immediate but silent response in their respective places was like,"We have voted you into office, and it is your duty to help the country avert any cliff it needs to surmount."  Many people began to pay attention to the drama in Washington as reported by the press. Questions arose about the idea of jumping a cliff and the dangers associated with it. Good, it was a new year day that majority of Americans were home watching the news about an economic cliff to be avoided.
They saw the dangers ahead of the nation if the cliff wasn't averted on President Obama's grim facial expression. They realized from what they saw on the president's face that the dictionary definition of a cliff must be real, and that it must be a situation no one who went over it could escape without fatal injuries or death. It explained why major press houses around the world followed the developments in Washington in the last hours before the new year and immediatedly after, monitoring efforts by Washington technocrats crafting bills to temporarily avoid the cliff and its dangers. The buzz in the press became avoidance of the cliff', no matter how imperfect the bills crafted, any other option will be catastrophe, reminding us of the human instinct and aversion to danger.
When the Republican caucus in the house raised objections to the senate bill that it didn't address spending, that they may tinker with the bill and may be sent back to the senate for re-confirmation, the thought put the nation on the edge. The BBC described the drama, "US Fiscal Deal Faces House Test;" CNN taggged it,"Boehner Seeks Vote for Amended Cliff Bill"; Fox News said, "Fate of Fiscal Bill in Doubt Amid Resistance in House" and New York Times cried, "House GOP Resistance Puts Passage of Tax Deal in Doubt." The House GOP members quickly thought that if the bill was sent back to the senate, the senate may not accept its amendment, may be held responsible for the resultant cliff and damages.
Let's join them if we cannot beat them becomes a last resort for the Republican caucus in the Congress, no one wants to be seen as working against the country's survival from a cliff.