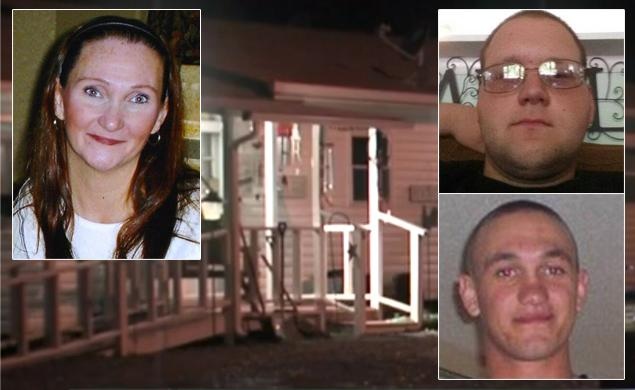 Smith and her two sons (Courtesy: Daily News)
It is still a new year. Some people are still heralding people with 'Happy New Year' wishes and radiating joy. But in three different homes in the United States on Saturday and Sunday, the sounds of the gun ended the joy that came with the new year, reports said.
In New York, a son shot his millionaire father point blank to the head, while in Oklahoma, a woman shot her two grown up children to death before taking her own life. In Kansas City, an eight old boy became victim of  a drive by shooting.
"My husband has been shot by my son," a New York Post report said of how Mrs. Sherry Gilbert, wife of the shot millionaire reacted to the killing of her husband by her son.
According to reports, trouble began between son and father over a $200.00 cut in allowance by Thomas Gilbert sr. to his son. Gilbert sr. is reported to have been generous to his son by paying his $2400 a month rent and at the same giving him $600.00 a month out of pocket allowance. But Gilbert jr. refused to accept an impending cut of $200.00 from the $600.00 out of pocket allowance.
In Oklahoma, Rebecca Smith reportedly shot her two children - both grown up adults - living with her, one of them a member of the US Army and a returnee from battle, and the other a divorcee, who returned home to stay with his mum after his marriage had collapsed.
Tulsa World reported that Muskogee County officials said said  Smith used a long gun to kill Levi Brown, 25, and Garret Brown, 24, while they were sleeping on Saturday morning, before killing herself.
No reason was given for Smith's killing of herself and children. But someone spoke about a lot of medications she was using.
Muskogee Phoenix newspaper reported that , "Woman, two grown up sons found slain in Warner home area." Another newspaper, Tulsa World reported that, "Mother use .22 Riffle to kill two sleeping sons, herself." Both reports said that the woman called a relative whom she intimated about her killing of her two sons and that she was going to commit suicide.
In another development, an eight month old boy, Jaquail Mansur, was reported shot in a drive-by shooting in Kansas City on Sunday and later died in the hospital. He was reported to be watching television with his mother in their home when shots suddenly rang out and a bullet hit the innocent boy. Police said there has been no arrest, because no one has given description of the vehicle that drove by and from which shots came.
NEWS AND FEATURES
News & Features Around The World