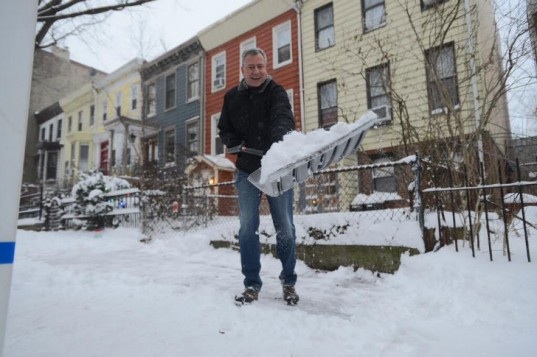 Mayor Bill de Blasio cleaning front of his home
After a night and day that seemed like a journey to Golgotha following a massive snow fall, New York City has returned to its beautiful self. It was not by a magic, but hard work by the sanitation department, and the law that mandates every home owner and store owner to ensure removal of ice from his around their premises.
The law is always enforced and any act of disrespect by a premise's owner attracts strict penalty. No home owner wants ticket from the city.
Rich Santoni, a security supervisor with Universal Security Services said if a pedestrian slips in a premises with collection of snow and gets hurt, he or she could sue the owner of the premises for damages. The same, he said, is applicable to the streets where anyone who falls and gets hurt can sue the government.
The government and premises owners are accountable, and to avoid a situation that could warrant government coming after you as a premises owner to avoid litigation, you have to create a path for people to walk apart from cleaning the space around your premises.
The sanitation plow trucks worked through the night on the streets. It was clear early in the morning that as sidewalks were heavy with snow, the road were paths for humans who found digging feet into the eight inches of snow on sidewalks resorted to use and the absence of vehicular movement helped in the navigation.
By the time residents ventured out in the afternoon, paths had been made through accumulation of snows around premises that enabled people began normal activities. A walk around a neighborhood in Flatbush area of Brooklyn late on Friday showed a return to normalcy; people shopped in stores and no one who should go to work had excuse for staying away. This is a routine and characteristic of the city anytime it snows.
As at about 10.00 pm Friday, all trains were still running local services ensuring no one gets stranded in a station for too long. Early Saturday morning, an announcement from the city council says it is illegal for premises owners to dig out snow and throw them on street. Meanwhile Mayor Bill De Blasio advises the sanitation department to continue with plowing. The result is a sparkling outlook on the streets that one will hardly think of a yesterday 's massive snow fall.
When you are in a high rise building in Downtown Manhattan close to the afternoon hours, one will doff the hat for the sanitation department for  good work.
Comment Form is loading comments...
NEWS AND FEATURES
News & Features Around The World