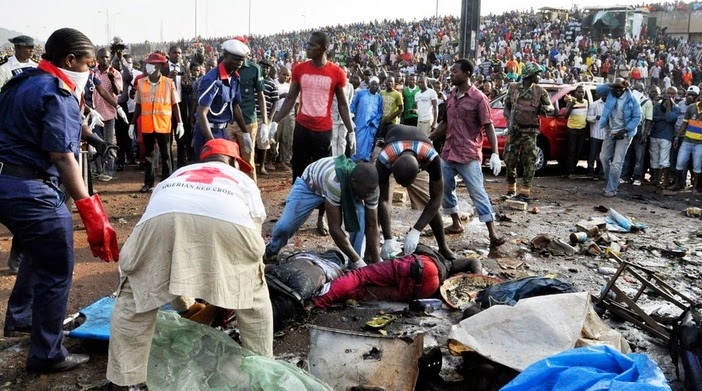 After the attack in Gombe, Nigeria
News reports on Monday said that President Goodluck Jonathan of Nigeria narrowly escaped an attack on Monday in Gombe,  at a campaign venue. The news reveal that some innocent Nigerians lost their lives from an explosion detonated by a female suicide bomber, who also died. And some others are saying it is a car bomb.
Many people believe that the death of innocent Nigerians following the attack was news, apart from the attack. But that there is more news in the escape of the country's president from Boko Haram suicide bomber or car bomb, few weeks to the presidential election.
They say that if the suicide bomber has hit her target and Jonathan has become  a victim, Nigeria would have been thrown into turmoil, and the chaos, which the international community wants to stop by making the two presidential candidates in the forthcoming election sign an agreement for their supporters to avoid chaos, would have happened.
Although, none of the two presidential candidates, Jonathan and Muhammed Buhari, approves Boko Haram's onslaught on the country, but an attack on any of them would have resulted in unmanageable chaos. It is also being debated that an attempt on Jonathan on Monday at the campaign venue by a female bomber suspected as Boko Haram element is a picture of what the evil organization has had in its plans - to get rid of Jonathan, because Jonathan is standing between them and importing Sharia into Nigeria.
And people are saying can't this be reason for Jonathan's avoidance of visiting the North East of the country since the mind bungling attacks on that part of the country?They are asking whether an attack on the president's convoy is not an attack on the president, and that who would have been their target, if not the president? Further,they ask if  gombe attack on Monday isn't a justification for the president's avoidance of visit to the area, even at the height of debate of the kidnap of over 200 Chibok girls?
Observers say that the Gombe attack on President Jonathan's entourage would open the eyes of partisan opinion writers, who all along have made criticism of tight security anytime Jonathan visit any part of the country a mantra. The critics want Jonathan to be or act like a popular president without tight security to be eligible for reelection.
Observers are awed that these critics have forgotten the country's experience, when Murtala Muhammed, the only Nigerian leader Nigerians remember as a savior was gunned down on his way to the Mosque in 1976 by Buka Zukar Dimka, an adventurer who wanted a return of those Muhammed had displaced from government. They say the singular mistake by Muhammed for posing to be popular and going about without security, not only robbed him of his life, it equally robbed Nigeria and Nigerians of the opportunity for good governance.
They note that Muhammed's death paved the way for Olusegun Obasanjo to be head of state, and led Nigeria into a political transition that brought the National Party of Nigeria, NPN, into the fray for further damaging of Nigeria. And they say since Muhammed's brutal murder, no Nigerian leader can claim to be as popular as Muhammed or loving the masses and ready to bail them out of deep poverty like Muhammed. The same would happen if any evil should befall Buhari, Jonathan's opponent in the February 14 election.
They say the attack on President Jonathan's convoy must be a big relief for Jonathan's supporters and the suicide bomber missing her target, because it makes Nigerians see why Jonathan may have been avoiding the North East and using tight security, and not that he doesn't care for the innocent Nigerians, who have fallen victims of Boko Haram's madness or that he is hard hearted as some analysts have suggested.
NEWS AND FEATURES
News & Features Around The World