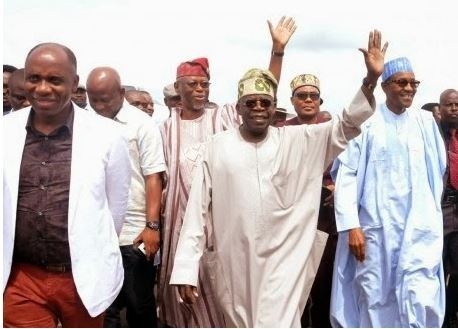 Amaechi, Oyegun, Tinubu and Buhari (Courtesy: famouspeoplesnews.wordpress.com)
Muhammed Buhari wants to be an elected president. It is his fourth time to present himself for election. In his fourth bid, he has ambushed himself with existence or non-existence of certificates he has said they are with the military secretary in affidavit to the Independent Electoral Commission, INEC.
The military has said it has Buhari's certificates, but that Buhari should also have copies of his certificates, and that if the former army General and military head of state wants copies of his certificates from the military, he knows the process to follow.
But rather than assuage Nigerians, by following the process to retrieve copies of his certificates from the military, one Tunji Abayomi - who claims to be a member of the All Peoples Congress, APC - and one of those he said vetted the party's presidential candidates' academic qualifications - says in an article that APC has adjudged Buhari as qualified to contest the Nigeria's presidency, and that there is nothing anyone can do about it, certificate of no certificate. Buhari is silent, while APC chieftains are messing up his aspiration.
What Abayomi has done is very much akin to calling the dog a monkey - an expression among the Yoruba people - that seeks to reject an explanation seen as invalid. Abayomi's postulation is not only invalid, but has added to the confusion surrounding the existence or non-existence of Buhari's certificates, and making the issue a major debate among Nigerians at home and abroad.
Hear Abayomi, "Certificate as set out in section 131 (d) is at best a rebut table proof of education not its definition. In view of the Constitution, and this is very intelligent, it is knowledge which recognizes as growing to a level..." He has been up educated up to."... That must be define the education qualification of the Nigerian citizen desirous of contesting for the office of the President." And continued, "General Buhari is at liberty to,present his certificates if he chooses to rely on them and through them that he has been educated to at least School Certificate level or its equivalent. But he could also leave it to the judgment of the Screening Committe of his party, more or less like a board that sits to accept or reject a Ph.D dissertation."
Apart from Abayomi showing the level of intelligence among Nigerina ruling class as shallow, it also shows their dubious sense of ownership and that other Nigerians who do not belong to their class have no right to question their imprudence. It is not surprising that the APC's chairman, John Oyegun, has joined the dance of shame. In an interview with Premium Times, Oyegun said that journalists should talk about ideology and what the political parties have for the country,  and that it is useless talking about a bloody certificate. "The law does not only stipulate the minimum qualification but also says its equivalent. so what is all the bother about?"
If Oyegun doesn't know what this debate about Buhari's certificate is about, he will be enlightened. Mr. chairman, the bloody certificate is all about the affidavit swore by Buhari that his certificates are with the military secretary. And words came out that the military said they did not have his certificates. Then the military spokesman said they have the certificates, but Buhari should have copies too and that if he requires the military to release copies to him, he knows the procedure to follow. Now, Abayomi rather than to talk to Buhari to follow the military procedure to ask for his certificates has told Nigerians Buhari is at liberty to release the certificates or leave it to the judgement of the APC's Screening Committee.
Having told Oyegun what the bloody certificate is all about, I will go further to explain to you what lying under oath means. It is only Buhari that can clear himself that he has not lied under oath by releasing his certificates. The words of the military spokesman that Buhari's certificates are with the military are not sufficient to dissuade Nigerians who have already perceived Buhari as a liar to change their minds, unless he presents his certificates. Many Nigerians, like this writer, can no longer trust their co-compatriots and the many institutions in the country, because of the all-pervading culture of corruption. If Buhari is campaigning as an anti-corruption candidate, he should not only be seen to be above board, he must prove it. Otherwise, he and all his APC team would be viewed as  an embodiment of corruption.
No certificate is bloody in this matter. It is Buhari and his APC handlers, who have allowed the certificate issue turn the beginning of electioneering bloody for Buhari. Abayomi and Oyegun's arguments point to a Waterloo battle for Buhari, because it smells like Buhari has no certificate and there is a seeming orchestration of cover up here.
HTML Comment Box is loading comments...
NEWS AND FEATURES
News & Features Around The World