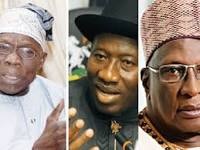 ﻿  Nigeria is getting ready for another election in February 2015, just two months away. The ruling party, People Democratic Party, PDP, had chosen the incumbent president, Goodluck Jonathan, to contest for a second term in office. The country’s major opposition party, All Progressive Congress, APC, had just emerged from a national convention, where a former military president, Muhammed Buhari, emerged as a presidential candidate. The campaign is yet to begin, and none of the parties has released any program that will help the electorate determine the party to vote for.

Obasanjo is a member of the ruling party and a secret promoter of opposition against the government. He had said he made a mistake of foisting the current president on the country, and he had been working tirelessly to get rid of him. So far, he had failed to get the president impeached through a mass defection of governors and members of the House of Representatives aimed at achieving his objective. Supporters of President Goodluck Jonathan are quick to ask whether the former president and members of the opposition, who have been accusing the current president and the ruling party of corruption, are themselves angels.

The newly elected governor of Ekiti State, Ayo Fayose , has been stout in his confrontation against Obasanjo, and he has emboldened others in the ruling party who are asking Nigerians to disregard the rabble- rouser attitude of the former president, citing his times in government as worse in term of achievement and corruption in comparison to the current government. Nigerians will have the opportunity to join forces either against the government or opposition, when they go to the polls in February.

Whoever have been Jonathan’s Nemesis, and certainly Obasanjo and Boko-Haram are two of them, have almost made the country ungovernable for him. Obasanjo’s hand is struggling with Jonathan’s on the steering of the nation’s vehicle. Boko-Haram has deflated the vehicle’s tires, while the opposition has energized Obasanjo's hand on the steering against Jonathan. Observers say that it is a miracle the vehicle is still on course with Boko-Haram decimation of lives in the North Central and North East of the country. They say it is also a wonder that Jonathan is still in power and hoping for reelection in February.

Observers are quick to point out that it is not doubtful that Jonathan may defeat Muhammed Buhari in the February election. They say that will not be the first time the former military president will be defeated by Jonathan if it happens again in February 2015. Buhari had lost presidential election twice.  The forthcoming election will be his third attempt. In his second attempt, he chose a popular Pentecostal pastor, Tunde Bakare, from the South West as a running mate. This time too, he has chosen another pastor, Yemi Osinbajo, SAN, from the Redeemed Christian Church of God, RCCG, as a running mate.

Political pundits have noted that Buhari is not a career politician and they question his choice of non-career politicians as a running mate, when what he needs is a professional politician who could help him through the thick forest of politicking and hard bargaining. Another thing the pundits say may work against Buhari is the wealthy Nigerians’ knowledge of how the government Buhari led as a military leader threw virtually anyone suspected of corruption into jail without trial, and the reason his own Nemesis planned a coup that unseated him, and brought Nigeria under the control of some military leaders who almost wrecked the country.

Another reason, observers say, many Nigerians may be skeptical of voting Buhari, is that he is another military leader coming to become a civilian leader like Obasanjo. They say that if Nigerians should consider Obasanjo’s legacy, his attempt to force himself on Nigerians for a third term, the level of corruption during his time in office, and that he personally cannot explain how he came about his wealth, they will not want another military leader, who had governed the country before, but was forced out for denying some Nigerians their human rights. His supporters had said his deputy, Tunde Idiagbon, was the architect of their administration’s legacy.

Not accepting the buck, and that Buhari may end up a ceremonial president,  leaving the ship of state for his vice-president – an acolyte of Bola Tinubu – another wealthy politician with questionable source of wealth, is what worries many Nigerians, even though they say Jonathan may not have lived up to their expectation as a leader, faced with daunting problems, some of which they say are not his own making. Curious Nigerians are worried about the president's unwillingness to declare his assets as required by the constitution. They are worried that Boko-Haram is almost swallowing a part of the country, and security of lives in some other parts of the country are at the mercy of kidnappers.
Much more serious is the charge against the president that he is afraid to step on toes. And he is doing nothing to stem the tide of corruption. For this last two accusations, the president has said he prefers to allow bodies instituted to fight corruption do their jobs without intervention from his office, and that he has promised not to tamper with media freedom. He said he has been working to right the wrongs of the past and that Nigerians need to give him time and more time, to overcome the darkness that has enveloped the country before he assumed power.