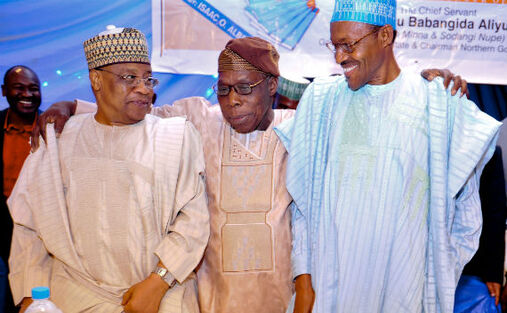 General Ibrahim Babangida, General Olusegun Obasanjo and general Muhammed Buhari
There was a wild and unexpected protest in Nigeria last week that shook the country and got the world's attention. It was the country's first major protest by the underrepresented youths in a long time.
However, the protest seemed to have failed like other protests before it, began by military officers in 1966 to stop the influence of corrupt elements in the affairs of the country.
The civilian government was barely six years after independence when it got kicked out by the soldiers over corrupt acts.
Unfortunately, soldiers are not trained about social equity, compassion, empathy and care. They are trained to kill enemies, and not to govern to right wrongs or help the underrepresented to gain what is due to them. But they do promise to right the wrongs, but hardly know how to go about it.
Soldiers ruled Nigeria up to 1979 when they handed over power to the civilians in their own way, and the election merely showed to the world that a baton was handed over to the civilians.  They did not say it was civilian government of their choice and not that of the people. They retuned the country back to early days after independence when the Nigerian leader, Tafawa Balewa, had a stint at University of London's Institute of Education, and corrupt element held sway. His position as prime minister was abolished by the military in 1966.
Major General Muhammed Buhari emerged with an intention to kill corruption that was restored to power in 1979. He failed because the nation was too complex for just an order rule military style. Ibrahim Babangida, the man who took over from Buhari, was also tutored in the military order business. He drove the ship of the nation into a turmoil when he annulled the election of his bosom friend, MKO Abiola, as president.
A new civilian government emerged after Babangida's turmoil with a former military leader as president. No one questioned the irrational manner of military leaders coming together to impose one of themselves over the country to cover up their dirty past. The emergent president, Olusegun Obasanjo acted like a father of the nation in his efforts to manage the economy and social issues. He acted as a father figure and not as an equal among equals because he was used to the patriarchy culture.
Obasanjo ensured a man of his choice succeeded him despite knowing the man's failing health. The baton was later passed to a man who considered himself a lucky who could not control the minsters and hold ministers in his government accountable. When Buhari returned seeking Nigerians support to be president, many Nigerians loved his days as a military leader, and they voted for him forgetting about the complexity of the country that is like a huge organization requiring a good sense of administration to handle ethical issues not by order, but by changing people's attitude through entire tampering with the nation's culture.
When you add the patriarchy culture to the military culture, the result is brutality and death to the challenger. When you are protesting police brutality, what about the patriarchy and military brutality culture that is prevalent in the country?
NOTE: We found through further research that Tafawa Balewa was Nigeria's first leader. He attended University of London's Institute of Education, became an inspector of schools for the colonial administration, before he ventured into politics.
Widget is loading comments...
NEWS AND FEATURES
News & Features Around The World