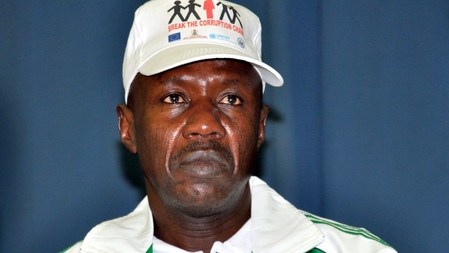 Ibrahim Magu (Courtesy:PremiumTimes)
Nigeria may have lost the battle against corruption. The situation in the country concerning the declaration of war against corruption is such that no one will will believe that the war has begun at all. and that if the war has begun, corruption has placed Nigeria in a losing position.
Nigerians are still arguing over whether the nominated chairman of the Economic and Financial crimes Commission, Ibrahim Magu, is fit or not to be the country's David against Goliath in the war against corruption.This arises from the finding of the senate that the Magu has skeletons in his cupboard or he is not overboard.
Magu was sent to the senate for screening for the position of the chairman of the EFCC. But the senate in its investigations stumbled on a development in his prior service to the country as equal to pitching corruption against corruption. Resultantly, the senate returned Magu's candidacy back to the sender, President Muhammad Buhari.
After the president had sent Magu to the senate for confirmation hearing and Magu could not pass the test, the president resorted to insistence that Magu was the man he wanted for the job. But how? To push the Constitution aside and begins a journey toward unconstitutional democracy?
President Buhari has since taken ill and he is in London. His deputy, Yemi Osinbajo, has however declared that Magu is the man the government wants for the job. And that has led to an impasse between Osinbajo and the senate. Osinyemi is a legal practitioner and attorney general of a state before his nomination as a vice presidential candidate. He knows the law and observers are saying that he should be the man preaching the need to follow the constitution and not otherwise.
Osinyemi is insisting that Magu will remain as chairman of EFCC. And that the office of the EFCC's chairman belongs to the category of offices that do not require senate screening for the nominee to work as chairman. The senate is saying that Osinyemi is teaching a bad lesson.
Concerned Nigerians are asking that If the administration is aware that the office of the EFCC's chairman does not require senate screening, why forward his name to the senate for screening in the first place? Observers say that on moral and legal ground, the government seem to be fighting a useless battle to insist on having magu as chairman of EFCC.
Observers are saying that If the government is fighting against the security report upon which the senate based its rejection of Magu, let the government publish the security report to show Nigerians that Magu's sin is not sufficient ground to disqualify him from the job.    And that for the government to insist on having Magu, despite the said unfavorable security report against him, will amount to a journey into the wilderness, approving corruption to fight corruption and making Nigeria lose the battle against corruption from the beginning of the war.
Comment Form is loading comments...
NEWS AND FEATURES
News & Features Around The World