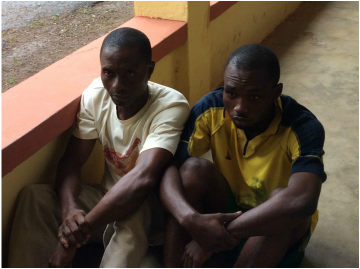 Two men helping the police to resolve a kidnap case
Two men have been arrested by Nigeria Police, in connection with two children kidnapped from Ijebu Ode in Ogun State, but have been found in Ebonyi State. The children are aged 9 and 7 years old. The police statement said that men of the criminal investigation department in Ogun State branch of the police tracked down the suspects.
According to the police statement, the suspects, Kingston Sunday,27, and August Johnson,47, were arrested when they were about to withdraw N150,000 ($900.00) payment for ransom, deposited by the police, based on the suspects' request and a bank account the police said the suspects gave.
The statement said that one of the suspects, Kingston Sunday, has been a friend of the children's  family, and has been helping to convey the children to and from school.
From the time the children disappeared and the time they were found, the police said their names had been changed to Bishop and Turey respectively, and they were no longer called their original names.
HTML Comment Box is loading comments...
NEWS AND FEATURES
News & Features Around The World