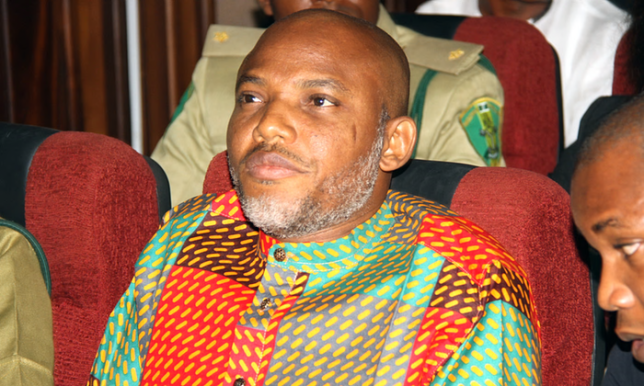 Nnamdi Kanu
Nigeria has started another journey toward infamy. lawyers of Nnamdi  Kanu, leader of the of the indigenous Ibo people of the East of the country, have asked a court to compel the Nigerian military, to produce him.
Reports say that Kanu has not been seen following the military's attack on his house and killing of about 28 people.
The military's action is the best way, people say, that the Nigerian government think Kanu has to be stopped, from leadership of his people, asking for a separate state.
Has Kanu been killed or has he been kidnapped and in the military's captivity? One thing is sure, reports says that no one is certain about his whereabouts.
Some people say that he may have been arrested by the military. Others say that he may have disappeared to avoid arrest. But the truth is that the government that ordered the military attack of Kanu's house has a question to answer about Kanu's safety or otherwise.
Nigerians remember the military's attack on Fela Anikulapo's house in Lagos and the killing of his mother during olusegun Obasanjo's time as military head of state. They remember the killing of Dele Giwa by a bomb, after he was accused by the government's directorate of military intelligence, of plans to ferment a revolution. Moshood Abiola, a publisher and a millionaire of repute, also died in questionable circumstances after winning a presidential election, unapproved by the military.
Many people with the knowledge of Nigeria say that the Nigerian state is so complex in jungle justice that anyone can mastermind the kidnapping and the killing of anyone over power struggle and individual show of force. It is a representation of a jungle, where the rule of law is mouthed, but hardly in practice.
Moreover, many Nigerians and other curious observers say Nigerian leaders are known to be brutal and heartless in handling opposition and dissent. And this also explains why many Nigerians live in abject poverty, because the leaders only care about themselves and will destroy anyone who tries to question their lack of concern for the majority of toiling masses.
​    The country runs a democratic government with former military leaders in control.
Comment Box is loading comments...
NEWS AND FEATURES
News & Features Around The World