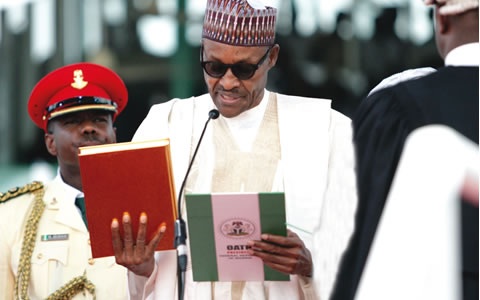 Buhari taking the oaths of office
President Muhammed Buhari is finally in the saddle. And because of the intense interest his election victory had generated for Nigerians' expectations of the new president intentions for his country, many people sought for the inaugural speech to gauge Buhari's plan for Nigeria.
The first assessment by a writer read by this reporter said President Buhari's speech failed to score a high mark. But John Kerry, the United a States' foreign secretary approved the speech and said the speech connected well with Nigerians' aspirations.
For Breyan Grann, a Ghanian resident in New York City, one singular statement in the speech was President Buhari's intention to relocate the control for the fight Boko-Haram to Maiduguri.
Manifestly, Nigeria's war against terrorism and ending Boko-Haram's onslaught scored a high point with the president's assertion that without locating the Chibok girls and reunite them with their families, the war against Boko-Haram would be deemed incomplete.
The president also expressed appreciation to the Nigeria's military and its effort in the war against Boko-Haram. He also extended a hand of fellowship for regional cooperation toward the fight against Boko-Haram. The importance given to the fight against Boko-Haram and the need to end terrorism against the country underscores the president's knowledge and realization of the development caused by Boko-Haram in ending Goodluck Jonathan's government and ensuring his own election.
Aside from Boko-Haram, it is true there are other factors contribution to Jonathan's loss in the elections, but the issues cannot compare to endless killings, a state of insecurity and government's seeming helplessness. It is not that the high rate unemployment of the youths or the infighting within the then ruling party and the opposition lashing on the opportunity to welcome disgruntled members of the ruling party to merge did not play a role, but the major cause of Jonathan's of Jonathan wreck was Boko-Haram.
Notwithstanding that Boko-Haram was major reason for Jonathan's failure, one should have expected a more robust attention given to the youths's high rate of unemployment in the country. Merely saying that the government would provide employment for the youths is not sufficient to galvanize the youths and make them reason with the government without a clearly spell out plan how the government will go about getting the jobs for them.
As it is, it looks the new government don't have the blueprint yet of what it intends to do to create employment or engage the youths. It also shows an anaemic plan on the part of the ruling party that as it campaigned for the end of Jonathan's rule, the party itself had no plan of what it planned to do to arrest mass unemployment among the youths. Another minus for the new president is that for over ten years that he has been running for the office of president before the victory in his third attempt, he has no major plan for the country, other than end insecurity.
It is here one will see why Buhari's inaugural speech lacks the galvanizing effect. Possibly, the government does not want to make a statement that will be so open about its intentions and cannot defend it if it is unable to deliver the goods. In so doing, it is better not to say what the government is unsure to able to do, and when eventually the government start doing doing, it can have reason to say that action is better than words.
But some people say we are in the 21st century when governments all over the word use the power inherent in the inaugural speech to strongly pinpoint policy direction to convincingly tell the electorate that it is ready for the business of governing, instead of leaving the people in 'let's wait and see' situation.
Buhari then emerges what seems lie shock and awe, with his first official appointment, the appointment of Ogbunnaya Onu as secretary of government, from the eastern part of the country, where Buhari failed to win massive votes, underscoring his statement that he belongs to all and that he belongs to nobody. But people are saying Buhari needs to spell out his intention for the youths and the mass poverty ridden people of Nigeria.
NEWS AND FEATURES
News & Features Around The World