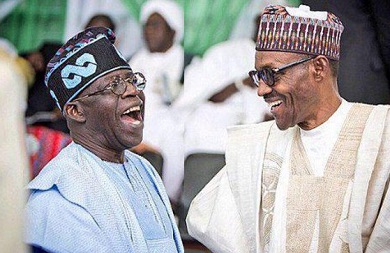 Tinubu and Buhari
Many Nigerians are crying of heavy economic burden, arising from what apologists of the current  government in the country, call an effort to right the wrong in the country. But no one has asked a question about why the downtrodden should be the people to bear the burden of any effort to help the country out of the quagmire that the rich and the politicians have placed it.
The rich and the politicians may also be losing somethings to the efforts to right the wrongs, but the effect on them cannot be compared to the hardship on the poor.
Why cannot ever be a way to correct without it being like deliberately bringing a sledge hammer on the poor? It is the question many Nigerians, who have seen unjustifiable astronomical rise in the cost of living in recent times. Yet, the government, the politicians in the ruling party and those who have enough resources try to justify government policies that have brought about the current suffering on poor Nigerians. And the excuse they offer is that politicians in the last government in the country have nearly taken the country into the funeral home, and they cite current financial crimes investigations and revelations to support their arguments.
Bola Tinubu, his wife and daughter, who all are strong members of the ruling party, recently said that the government in the country had veered off from what they expected it would do, when they voted it into power. Now, with the government's decision to move the price of gasoline to Ni45.00 per liter and resulting to most miserable life for the poor, it is shocking that Tinubu and his daughter are in the fore-front of campaign telling Nigerians and the labor unions to allow government's newly introduced burdens to survive.
Many people are wondering about what may have happened behind the curtain, to warrant Tinubu and his daughter to have turned 360 degrees in support of a government policy that is bound to send many poor Nigerians into their graves, the same way that lack of policy and stealing by successive governments in the  country had sent many Nigerians to their graves in the past. Curious observers ask if there is any difference between governments that have no policy or whose members are mostly thieves and one that has policy with one angel but whose majority members party.are questionable.
These observers point to the cause of opposition by disgruntled members of the last ruling party against the government and how they came together with others outside the party to wrest power from the former ruling, and that majority of the members of the current ruling party are from the former ruling party. Majority of the godfathers in the current ruling party are said not to be better than the politicians in the former ruling party being exposed as thieves. They are asking the reason the government is lukewarm in going after those questionable rich, who financed its election.
They are asking why is the government turning eyes away from the likes of Olusegun Obasanjo, Ibrahim Babangida, Abdulasalma Theohilus Danjuma and a whole lots of others, who all have oil blocks to their names, while poor Nigerians become the ground they tread. Is there anything in the country's constitution that says some Nigerians could commandeer oil blocks to themselve and other Nigerians should not? What form of compensation have Nigerians with no oil blocks? Endless suffering?
Is it not appalling that a leadership that is fighting corruption has no wherewithal to begin with dubious Nigerians, who have criminally shared the country's oil blocks among themselves? Of course, based on their past experiences in the country, many Nigerians are crying in silence, about when they would be saved from promises without fulfillment and continued suffering, while dubiously rich Nigerians are walking about proud of wealth they have amassed in office and for which they also also benefited their friends as gifts.
​   As a former petroleum minister, Buhari cannot claim lack of knowledge of the culture of sharing of oil blocks among top politicians and highly placed past military officers. is it not the worst crime anyone can commit against Nigerians? What has he done about it?
NEWS AND FEATURES
News & Features Around The World