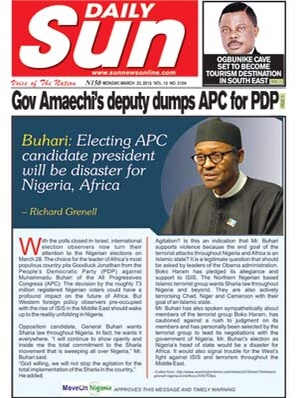 Most times, people are faced with dilemma about making a choice between two hard situations. It happens more in an election as it is currently in the Nigerians' case, who are faced between voting for an incumbent president or the opposition candidate. In Nigeria's case, it is like being asked to choose between Sharia and the economy. The economy represents assurances about food and money in the pocket, while Sharia represents living with insecurity from religion insensitivity and the danger it connotes.
Food is important for human survival just as money is. Hunger can make a man denounce his right or rights just like Esau denounced his birth right when he had need for food and found himself at the Marcy of Jacobs. And Nigerians will in four days choose which way to go to either choose to fill their stomach like Esau at the risk of having Sharia driven or forced into their lives either by coercion or through back door. It is all the presidential election of March 28 about and not any other.
For example, a Nigerian newspaper, Daily Sun, on Monday had its front page dressed with a story on the issue of Sharia, the picture of the opposition party's presidential candidate and a statement :" Buhari - Electing APC candidate president will be  disaster for Nigeria, Africa." The statement originally originated from Robert Grenell,  a United States' expert, in an interview first published by the Washington Post.
Sharia is one of the topical issues in the current election campaign along with the state of economy, insecurity and corruption.
The economy has been a sham for as long as Nigeria has existed as a country. So also is corruption. Sharia and insecurity are the two new sources of evil that Nigerians are grappling with. Sharia and insecurity are inseparable in term of the current Boko-Haram's onslaught.
If you ask any Nigerian, he or she will tell you the mastery of living in a bad economy and corrupt environment is no longer a new lesson to be learnt, because they have been living with the two evils for a long time and know how to navigate around it.
But the Sharia and insecurity are entirely different ball games. Ask who wants to be kidnapped and be taken away to only God knows where like the Chibok girls? The answer you will get is none wants to. Ask who wants to be killed like a goat with a knife to the throat? The answer you will get is none wants to.
Every Nigerian knows that the major demand of Boko-Haram from the beginning of its evil campaign and killings is Sharia. And the unfortunate thing for the opposition party is the link of its presidential candidate to the love of Sharia. Of course, as a candidate, he has promised to exterminate Boko-Haram with his military experience. But will he also exterminate Sharia?
It is where the importance of the interview published  by the Washington Post comes in. People say that if Nigeria is a country with a sophisticated electorate, the Washington Post's interview and its reproduction by local newspapers would have been the determinant of the election's outcome, because the interview has the capability of alerting the electorate to the danger of allowing anyone with love of Sharia a way into power. And it is about the power of the media to genuinely affect election's outcome.
Corruption has become a little issue for Nigerians to use in determining who to vote, because both parties contending for attention have corrupt people among their top officers and financiers. If the two parties are represented as two individuals, both will fall short of ability to declare sanity from stealing. Nigerians have a choice to make like Esau, to take the porridge or not take the porridge. Take the porridge and risk Sharia being forced down your throat against your will, when you are not even sure that these politicians have the capability turn your economic fortune around, because all they know is taking care of their needs first.
NEWS AND FEATURES
News & Features Around The World