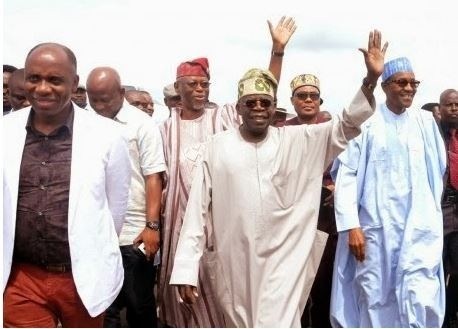 Chieftains of APC, Nigeria's new ruling party. The president-elect, Muhammed Buhari is far right
The All Peoples Congress Party, APC that has just won the presidential election in Nigeria is manifesting dictatorial tendencies. It wants to contest every lost election, and it is challenging the handover date announced by the government.
Rather than be magnanimous in victory, the party is proving that to lose a seat in any part of the country could only have been caused by rigging, and that there must be certain sinister motives in the government's plan for the incumbent president to handover the baton of power to Muhammed Buhari, the newly elected president on May 28, instead of May 29.
Observers of events in Nigeria are saying this development is nothing short of manifestation of dictatorship in the incubator stage. Rather than the winner, the APC, to show maturity in winning, it is the loser, the People Democratic Party, PDP, that is showing magnanimity in losing by accepting defeat and not spoiling to go to court to challenging the winners. Gombe seems the only state the PDP has won the governorship election against expectations of the APC, and the APC has vowed to challenge the loss of its candidate in court.
Against court rulings, the APC law makers in Ekiti are hellbent in their plans to impeach the state governor, Ayo Fayose, a PDP candidate who won the governor election in a landslide victory and whose people voted for the party's the presidential candidate in the just concluded election in the same manner they voted for the governor earlier. What the APC is saying indirectly is that any election it has lost as a party must have been rigged. Yet, the party's victory in the governorship election in IMO State surrounded by the PDP victories in surrounding states has not been challenged by the PDP or described as having been rigged.
Many observers are worried about the direction of events in Nigeria and what this may lead to in tern of scuttling freedom of opposing views, if the APC is not quickly asked to stop its dictatorship tendencies. People are saying it seems to have become a style for the APC and its gang of defected governors from the PDP, whose accusation against the incumbent president has been that of dictatorship and that their reason for defection and attack on the president is to foist democracy.
Observers say the president was accused of plans to rig the presidential election at every stage leading to the polls, but the man said if he lost the election, he would accept defeat. They say there is no kind of tantrum the APC did not throw up in to the air accusing the ruling party of plans to rig the presidential election. But the election has been concluded and the president has accepted defeat and congratulated the winner, and yet the APC has not seen reason to foist democracy,  but rather it is foisting dictatorship, a wish to have its way at all cost without consideration for others.
Now, it is becoming clear that if Goodluck Jonathan is a dictator in any form or imagination as has been charged by his detractors in the APC, the APC chieftains have emerged as Nigeria's new dictators. But the APC chieftains need to take note from this moment that independent minded Nigerians are waiting for it to form its government and see the direction it will take the country. If the party's direction shows to be negative against expectations of many Nigerians, the government will have a large dose of criticisms from the first day, and that the the party should not expect it will be given one year to roam as  has been suggested by Prodessor Wole Soyinka in a media interview.
The party has won the presidential election and the world has felicitated with it. If the ruling party says it is handing over the government to the party on May 28, what is wrong with that? Is difference in handover date anything to do with changing the effect of governance on Nigerians? The party has said the effect of governance on Nigerians is negative, because the ruling party has diverted the nation's resources, and that it is coming to use the resources for the benefit of Nigerians. Why not take the power a day earlier than anticipated, if offered, as it is being done and show world the good stuff you claim to possess?