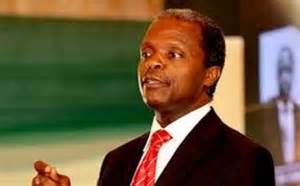 Yemi Osibajo
The Switzerland Government is to repatriate $321 million back to Nigeria, money illegally stashed away from Nigeria by the country's former military head of state, General Sanni Abacha.
News reports reveal that an agreement to this effect has been reached by officials of the Switzerland authorities and the Nigerian Government.
The agreement to release the money held in Switzerland was reportedly reached in Abuja between Swiss officials and the office of the Nigerian Vice President  Yemi Osibajo, who said that the money would be used in the interest of the people. Osibajo is further reported that Switzerland has been in the forefront of returning stolen assets and ensuring that the Nigerian people gets the benefit.
Observers are quick to say that it may be true that the Switzerland Government may truly have been in the forefront of releasing stolen assets and striving to see that the Nigerian people gets the benefit, but that the case has been that the Nigerian people hardly gets the benefit. They said that the Nigerian people not getting the benefits may not be the fault of the Switzerland Government, but that of the Nigerian leaders. Therefore, they say all eyes are on how the current leadership in Nigeria will use the money being recovered.
Coming amid oil price slump and gradual rise in oil price and uncertainty, the release of a huge amount of money to the Nigerian government is seen by observers as timely and that it will be grander if all other countries holding such money stupid politicians and military leaders have stashed away.
Of course, the world knows that the price of oil has been slumping lately, and that the price has gradually started to go up again, but not yet at a high enough to comfort worried government leaders about the misfortune of oil price slump. Now currently at $37 per barrel, a far cry from what it used to be, leaders in oil producing countries may have no choice than looking elsewhere for revenue. And for Nigeria, a lot of stashed away fortune can be recovered and the government should let the people know how such recovered funds are utilized.
How much has been recovered so far from abroad and from politicians at home by the current government? Should the actual figure be difficult to tabulate for Nigerians in asll works of life to know how much their government has recovered on their behalf? And what does the government intend to use the money being recovered for?
Is it just enough for the government to say it is recovering money and will be used for Nigerians' benefits without really showing that the government is transparent enough, by making everything public for Nigerians to know beyond the coffers of those in government? Just recently, President Muhammed Buhari said that he did not intend to pay graduates N5000 for nothing, and before he finished talking, his supporters said he never promised to pay such an amount to anyone.
Government officials then went into a campaign mode with information that the stalled budget has enough money in it to guarantee the payment of monthly stipends to one million highly vulnerable Nigerians. But they failed to explain how they will determine who are these one million vulnerable Nigerians out of the sea of poor Nigerians. And for this lack of transparency, observers say that the program, if it ever exists as a program, may end up as a program by the ruling party to take care of its supporters and foot soldiers.