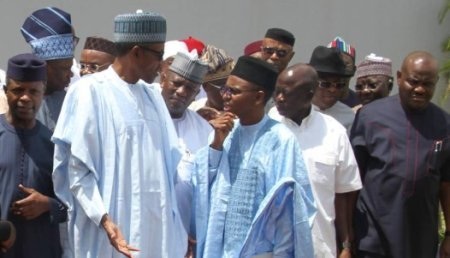 President Buhari and his men (Courtesy: Vanguard newspapers)
Nigeria is on its backward move again as it has always done, but telling the world it is moving forward. This time it is about lack of accountability for what may have caused some states to have left their workers' salaries unpaid for several months. It is just about a fact that Nigeria doesn't account for anything, though much is said about holding public officers accountable for their actions.
To bury the current issue of civil servants unpaid salaries for about seven months and the possible mismanagement behind it,  the government on Monday said it has released money for the workers to be paid. The end of the argument about what happened to the money meant for the unpaid workers's salaries
The media report says that help is on the way. But no one has asked whether or not the Federal Government will tell Nigerians or whether Nigerians will want to know or have the right to know, why some of the state governments have left their workers in the limbo for seven months with salaries unpaid.
There have been arguments that some of the state governors may have diverted the money allocated for the workers salary to their party's presidential election campaign, while some of the state governors said the reason they couldn't pay the workers' salaries was due to shortfall in allocation from the center.
It is possible that President Muhammed Buhari and his governors have been able to establish or confirm that the governors may have said the truth before deciding to bail out the states to pay the salaries owed workers. But don't Nigerians the right to know what may have happened?
All that Nigerians knew before Monday was that the Federal Government had said it wasn't bailing out the states that owed workers's salaries. Consequently, there followed stringent arguments that it would be unfair for the workers to be left in the limbo without talks between the Federal and the State government on how the affected workers would be paid.
Just coming out of the limbo and announcing that the Federal a Government has decided to use a particular oil account to pay the workers salaries and that arrangement has been concluded for the workers to be paid, without also finding out what may have caused the states insolvency that led to the workers's unpaid salaries is a half  measure at best.
What many Nigerians think is that it would have been criminal for state governors to have used money meant for workers' salaries to fight an election and the leave the workers to gasp for survival. This reporter has raised the issue as it the illegal use of states's money to fight an election in which the president himself was a candidate and may have benefited from the illegality.
It is said that those who come to equity should come with clean hands. By sidetracking an opportunity to begin his accountability quest either for a reason to save himself and his governors from obvious embarrassment or he has unwittingly sacrificed holding the state governors who could not pay their workers' salaries accountable, all the songs about accountability seems like all air and lacking substance.
Why is not surprising is that it is the Nigeria's way of doing things. Buhari has begun the music,the familiar music about accountability that he will hold his immediate predecessor accountable, but he has said nothing about all the former retired military Generals who are all billionaire out of office can go free with all their loots.
It means no one will ever question Ibrahim Babangida how he comes about the billions in his possession; no one will ever question Olusegun Obasanjo about the billions in his possession, no one will ever ask all of them who are billionaires in the country who are former office holders, how they come about their questionable wealth.
And further more, no one will ever ask questionable rich Nigerians and some foreigners outside the country, how they come about oil blocs, while indigent Nigerian people suffer continued deprivation.
NEWS AND FEATURES
News & Features Around The World