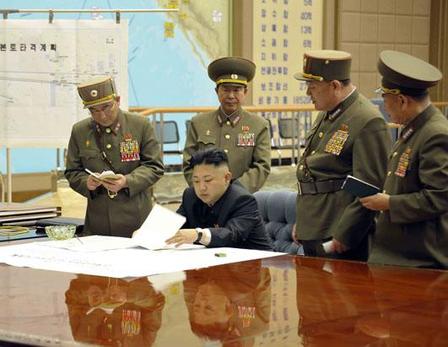 Kim studying a map (Courtesy:KSNA)
What does the leader of North Korea, Kim Jong Un, want that has made him to become belligerent against forces that are capable of destroying him with his questionable actions?
First, he said that his country was in war mood with its closest neighbor, South Korea. Next he said he was preparing to attack the United States - photos showing him studying a map about how to reach the U.S with his bombs. Next there are reports that he has announced his country's intention to return to the production of dangerous arsenals of war his
father abandoned in 2007.
And now, there are reports he has ordered his country to begin moving instruments of war?
"Is Kim not proving to be a psycho?" people are asking. If he is as people have been compelled to suspect by his actions for belligerence, he is more dangerous than a sane person will be expected and it makes the countries he is threatening attack to be more vulnerable. People are saying that if  Un has the power to do all that he is threatening, the world is in danger and those countries he is threatening need to take steps for protection against innocent citziens.
Was there any entitlement Un's predecessors enjoyed as leaders of North Korea that had been deprived his government? Or what could be the cause of his threats of fire and brimstone?
The first cause of this problem is the curse of inheritance that has made power to pass from father to son without proof that the man who inherits his father is sane and has been approved by the people. And it is one of the reasons people are against royalty and all its burdens on the society when people are expected to pay allegiance to a person they dont know or trust in the name of kingship and tradition. Sadly it was what happened in North Korea where one family had taken over the right to rule and control a whole country like one of the backward villages in remote countries of the world before the Renaissance.
Happily, people note that North Korea appears to be the only country in the mode of the backwardness of a country on ts own without contact with the rest of the world. The danger that Un is driving North Korea into with his reckless utterances and actions is that when the trouble comes majority of North Koreans will bear the burden, whilst only him,members of his family and his commanders should become history. People around the world are pointing to Iraq's former leader, Sadaam Hussein, his belligerence against the U.S. and its consequences to Iraq.
People said at the time that Hussein knew his country lacked the fire power to fight the U.S., yet he said his country was ready for war and that Iraq could humiliate the U.S. He was the first who was humiliated. The saddest event was that Hussein ran Iraq into an avoidable trouble and pogrom.
People are saying today that no country will be threatened the way North Korea's Un has been threatening certain countries will fold its arms and let a lunatic visit mayhem on its people.
If the world cannot unite to disarm North Korea under Un, the possibility of him running the country into utter danger of near annihilation cannot be ruled out.
Already, he has called the U.S. into action, China is warmng up in readiness for action and South Korea is ever ready to protect its people against a land locked country that has no respect for humanity. Can the North Korea alone contain these powers?
The answer to the question exposes Un's lunacy.