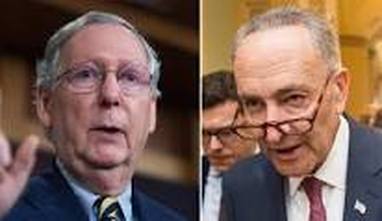 Senate Majority leader McConnell and Minority Leader Schumer
The Nuclear Option, a procedure, which will enable the Republicans change the procedure for the confirmation  of Neil Gorsuch, the Supreme Court nominee, is on the table in the American Senate. This follows a filibuster by the Democrats - with a vote of 41 against Gorsuch's confirmation.
With the Nuclear Option, the Republican will be able to confirm President Donald Trump's nominee for the Court with a simple majority of 50 or 51 votes of the Republican senators, excluding the Democratic Party senators.
It is the only choice opened to the Republicans, with the Democrats backing out f Gorsuch's confirmation with their nay votes. The first step taken was Republican votes to quash the Democrats' nay votes. After this, reports say the senate can  now go ahead on the nuclear Option.
There are re[ports that say that the Democrats after the filibuster of Gorsuch's confirmation, wanted to delay whatever steps the Republicans will take until after next weekend, but the Republicans with their readiness to go for power against power to break the Democrats' resolve against Gorsuch, decided quickly on the Nuclear Option.
Apparently, the Nuclear option would have been unnecessary if the Democrats have not voted negatively against Gorsuch. The party was given a chance to show its readiness for cooperation, but it bungled it on the altar of a continued fight to affirm its request for the Republican Party to withdraw Gorsuch's nomination, to allow the parties on on the same level of having missed confirmation of Supreme Court pick, after which the Republican Party can present another nominee.
But observers see this as saying that when a nominee is highly qualified as Gorsuch is, he can sacrificed on the ground of negative politics, and that such should not be allowed to creep into the country's politics. However, the same observers regret that the Republicans did not allow the world a hearing to know the qualities of Merrick Garland, the Democratic Party's nominee, whom the Republicans shut the door against his hearing.
But people are asking about the danger that allowing politics to creep into the confirmation of the Supreme Court confirmation will serve the country and whether there is any use for the overt politics in this matter. It is a case of asking whether politics is about power game or saintly affairs.
The answer is that there is nothing saintly in politics, other than that allowing a precedence, and inability to do that will mean a recourse to other ways to move ahead. Manifestly, the senate, Mitch McConnell spoke in support of finding a way to do the right thing against Chuck Schumer's continuous call for withdrawal of Gorsuch's nomination and replacement.
The deadlock is what has brought the nuclear Option on the table, because the Republicans said they have done everything humanly possible to convince the Democrats to their side. Reports said that if the Republicans succeed with the Nuclear Option, Gorsuch will be youngest Supreme Court nominee at confirmation. He is 49.