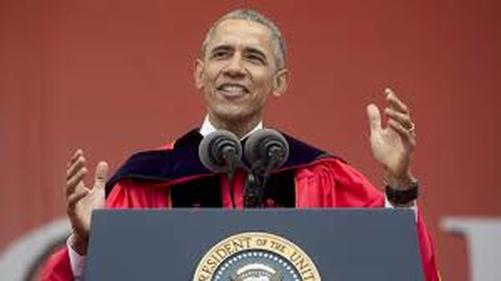 President Barack Obama at Rutgers
News reports were agog about President Barack Obama's recent statement at Rutgers University's commencement, about intellectualism, and certain unnamed politician, who wants to be president for just being an entertainer.
​   The fact that it was not first time Obama spoke about the qualification for the office of the president, and seemingly saying that entertainers are not qualified to be president, made the media to quickly connect his speech at Rutgers to Trump.
Connecting intellectualism as prerequisite for the office of the president, President Obama undoubtedly sounds credible. But it begs the question about who is an intellectual and whether Trump in spite of being an entertainer is not an intellectual or whether one has to be trained to be a lawyer to be an intellectual. Aside from raising issues about who is an intellectual, Obama's statement also reminds spectators about certain people's unbelief in his capability to be president as a first term senator and community organizer.
Just as Obama has proved doubting Thomas wrong, Trump supporters are saying that if Trump becomes president, he may likely prove President Obama wrong, considering his track record as a college graduate, who took over his family business as soon as he completed college and has taken it to a level that people admire. However, President Obama may be right if he is talking about political intellectualism and statements from both sides of the mouth, targeted at insincerely convincing voters of different political blocks to gain their votes, which Trump obviously lacks.
But intellectualism is not about forcing your policy on people, irrespective of the opposition to it. That itself is a failure when ability to reason along with mental capacity are put on a scale. Let us consider the current issue of the law by the Federal Government concerning transgenders and the use of bathrooms. The law says that anyone should be allowed to use the bathroom of the gender he or she feels a sense of belonging, even if the person's gender is opposite of the gender that the bathroom is provided for. It means that if one is physically a man, but feels that he is a woman, he should be allowed to use the same bathroom with women.
Many people interviewed by this reported say that there is something wrong in the present mental development leading to such government directive. Many people are actually saying that they believe that Obama's government is taking the issue of freedom to the most dangerous precipice and they wonder whether the people who put such directive together still have power of reason. Many other people are wondering whether there is a connection at all between intellectualism and reasoning that says a man who feels he is a woman should go into a bathroom meant for girls, despite his having a dangerously long 'John' under his pants.
Now, many women are agitated about sending their children to school, fearing the bad influence, which suddenly seeing people of opposite sex entering their bathroom could have on them. Many more women fear that a dangerous male could use the pretext of such directive to abuse innocent children. And people are are asking about the location of intellectualism in this development.
NEWS AND FEATURES
News & Features Around The World