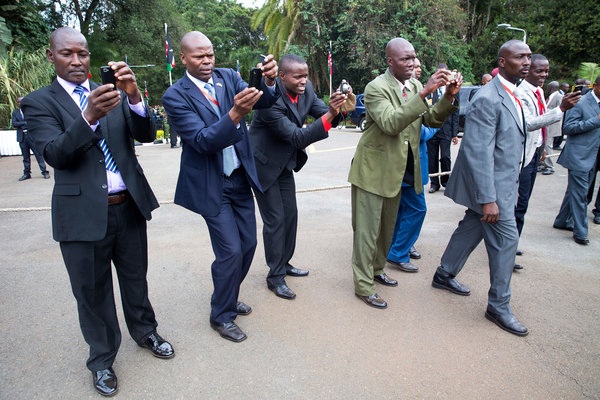 Kenyans delightfully photographing President Obama's welcome ceremony (Courtesy: nytimes.com)
Obama was in Kenya on Friday, Saturday and Sunday. Kenya is Obama's father's home. News reports said the president met with family members, both the nuclear and the extended family. The president expressed joy about what he saw as signs of transformation in the country and he preached about democracy, human rights, freedom and tolerance.
But his host, President Uhuru Kenyatta, did not mince words in his response to Obama's wishes. "There are some things we must admit we don’t share; our culture, our society don’t accept,” he said. “It is very difficult for us to be able to impose on people that which they themselves do not accept,” the New York Times reported Kenyatta's words.
Obama hooked his sermon on love, respect for the law and who you are. Obama noted that his father was from Kenya. He did not say he is from Kenya. But he acknowledged that he has a family in Kenya. For a curious observer, this is where the talk about the difference in culture either caused by strokes of the law or transformational traverses begins.
This reporter was born in Ile-Ife, Osun State of Nigeria. But his parents are from Ugbekpe-Ekperi in Afenmai area of Edo State. Though he spent his childhood and formative years in Ile-Ife, he believes his is from his parent's hometown of Ugbekpe-Ekperi, because it is what the culture and the political arrangement in Nigeria say. The reporter feels more at home having the same sense of belonging like his parents, and He does not feel He has lost anything for not claiming Ile-Ife as his hometown.
Despite this, he still visits Ile-Ife and the King and his assistants never take away the recognition from him that he was born in the city. The last time he was with the King, the King told his assistants that anytime the reporter wants to build a house in the town, he should be given a piece of land. The reporter finds himself in the same shoes with the American President Obama, who by the virtue of his father's birth in Kenya, has a sense of belonging, but politically he is an American, reckoning with his place of birth.
“I’m proud to be the first U.S. president to visit Kenya, and obviously, this is personal for me,” he said at a business forum. “There’s a reason why my name is Barack Hussein Obama. My father came from these parts and I have family and relatives here. And in my visits over the years, walking the streets of Nairobi, I’ve come to know the warmth and the spirit of the Kenyan people.”n American, reckoning with his place of birth.
Ironically, President Obama cannot claim to be a Kenyan and he hasn't. But historically and almost a coincidence, he is the first American president on official visit to Kenya. Yet, he finds himself among family members, whom he acknowledged are part of him, and he apologized for having little time to interact with them, acknowledging the importance of the family, a universal concept, but he is silent about the difference in family structure based on culture, from place to place.
In Africa, the extended family structure is vital to society's well being, unlike some other societies where the immediate or nuclear family is all that is recognized, but without denial that in all societies, families make up the society and that the well being of the society is tied to the incorruptible upbringing of children in the family and this is tied to the good work of parents and teachers, who help parents inculcating discipline in children, who will eventually become leaders of the society.
The family and the society agree that deviant behavior is not a crime, but every family works to ensure deviance doesn't creep into their midst for the benefit of the society. Deviance beyond normalcy attracts society's upbraiding. It must been reason President Obama advised young people to always ensure their trousers (pants) are not dropping in the public, during the last election campaigns. It is love for one another which President Obama hung his sermon for tolerance that would make elderly people tell the young ones or deviant, how to live and be happy.
Many people agree that there is a need to be careful that not all that outwardly happy that are naturally happy and that natural happiness and man made happiness are two separate things. Obviously, some societies have devised means to introduce man made happiness, where natural happiness is impaired and the natural culture impeded. Africans are saying they don't want their natural culture impeded; they are saying they don't want out of control deviance and that they need cultural independence respected.
The difference in culture between the different people that inhabit the world was what President Muhammed Buhari told President Obama last week in Washington; it was what President Uhuru Kenyatta had told President Obama in Nairobi, and it is possible what President Obama will hear the same in in Ethiopia - the next stop in his African tour.
Everyone agrees that every individual has the right to be free, irrespective of home or place of birth, but that it is critical and ethical that such freedom should not be outside the acceptable norm.