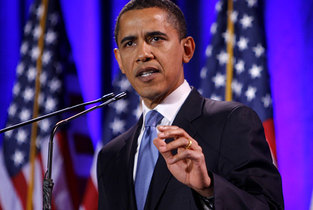 President Obama
President Barack Obama has reacted to rights' denial in United States, from protest over police killing of unarmed teenager, Michael Brown in Ferguson, Missouri.
"There is no excuse for the police to use excessive force against peaceful protest or throw protesters in jail for lawfully exercising their First Amendment rights. Here in the United States of America, police should not be bullying or arresting journalists who are trying to do their jobs and report to the American people," the president said.
Before police shooting to death of Michael Brown in Ferguson last weekend, there had been plans in New York for a protest match on Verazanno bridge over Eric Gardner's death in police hands with the city authority insisting against the use of the bridge for a protest match. Al Sharpton agreed. There would still be a protest match, but not on the bridge.
The troubled relationship between the police and the black community is a case that no one knows where next. But amid the tension, a president's voice rises against rights' denial.
NEWS AND FEATURES
News & Features Around The World