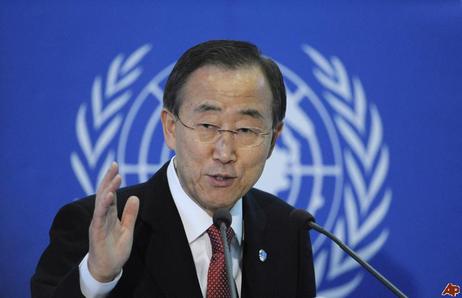 ban ki-moon
President Barack Obama's resort to executive orders in addressing problems militating against the family welfare buttresses the discussion at Davos' World Economic Forum last week and the debate on poverty.
Consequently, the president ordered raising of the minimum wage for a section of federal workers to be hired by new contractors to $10.00 an hour.
Although, the president mentioned no war against poverty directly. It was clear that his drive to increase minimum wage and his worry over a large number of people being stuck in the economic compass spoke volume.
The difference between Obama's fight against economic trouble for the poor and that of a panel of discussion organized by Associated Press in Davos is that unlike the discussants' argument in Davos that efforts to eradicate poverty must be linked to climate change, Obama does not.
Observers say that every other statement that follow in Davos about the need for good governance, humane capitalism and discouraging protection of special interests are all known prescriptions the rich also counter in their own way.
The fight against poverty began early in the new year with Cameron's message to Britons that centered on the economy and the battle to make life easier. The speech touched on areas that the prime minister said will help the economy. He expressed optimism that the country will turn the corner after he mentioned the course of the country’s journey, how the country had arrived with a bright future despite trials, because the country’s plans toward rejuvenation were working.
The country has faced a scourge of unemployment for three years running. But for the first time, she has succeeded at lowering the unemployment rate from 8.0  gradually to 7.2 in January 2014. But the prime minister is somehow worried, especially by the movement of people from poor European countries into Britain. He has expressed his opposition to what he calls poverty migration into Britain. He is possibly wary of the damage such migration could cause his government’s achievement. Now, another good news is that the country's unemployment has dropped further to 7.1 percent.
The year began in the United States with a carried over news of an end to unemployment benefit to those who have been long on welfare. President Barack Obama rose and told the Congress to renew the welfare for this group of unemployed. The senate has passed a bill in consonance with the president’s call to extend welfare for the unemployed whose welfare have expired, but it remains for the bill to scale the hurdle in the House of Representatives. Shortly after the senate’s passing of the bill, news emerged that the number of people employed in December was encouraging. Though the December employment figure fell short of expectation, but the good news was that the U.S unemployment rate was lowered to 6.7 percent.
Shortly before this, the New York Times reported the war on poverty declared 50 years ago by President Lyndon B. Johnson’s administration as a mixed bag. Meaning that the war has not achieved its aim, but that there are some reasons to cheer. However, the report says there is still a long way to go in conquering poverty. The report says the ranks of the poor and the near poor are at record high. The same that is applicable to the U.S is applicable to all developed countries. The struggle against poverty all over the world has shown that poverty is real and it is not limited to the poor countries alone. If poverty level in developing countries is as high as publications have shown based on data, and the struggle to control it has been intense as one has witnessed in major developed countries, what will one say about poverty level in the Third World countries?
The difference that exists between the poverty level in developed countries and under developed countries is wide, because developed countries have been able to mitigate the extent of poverty level through social welfare programs.
It is the attraction of these social welfare programs that has made migration from poor countries to rich countries a do die affair by people running away from poverty poor countries. The rich European countries have fought to keep migrants from poor countries to a manageable level without the world knowing the term they have in mind for excess migration from the poor countries until the new debate about the migration from their poor neighbors ( poor countries within Europe) expose the terminology as poverty migration. Migrants from such countries are viewed as coming to encroach on welfare programs.
Observers are saying that the time has come when the U.N. must compel every member nation to foist the type of welfare programs in developed countries to mitigate the level of poverty in the world. They say the practice in developed countries has shown that welfare programs have capability to mitigate poverty. Secondly, they say when welfare programs are available in all countries; the fear of migration by developed countries and the tendency to discourage migration from poor countries will lessen and less people from poor countries will be willing to embark on journeys of beginning life all over again.
Basically, they say it makes strong sense that most of the countries called poor countries are not poor, but that their leaders misappropriate the countries' income, and making the larger population to live in abject poverty.
This is an obvious answer to a question about whether the world will ever be able to conquer poverty. Poverty is seen as an integral part of humanity; as what has given meaning to the existence of fortune and misfortune. Misfortune of poverty that everyone tries to escape will always be here, but that it can be mitigated through availability of social welfare.