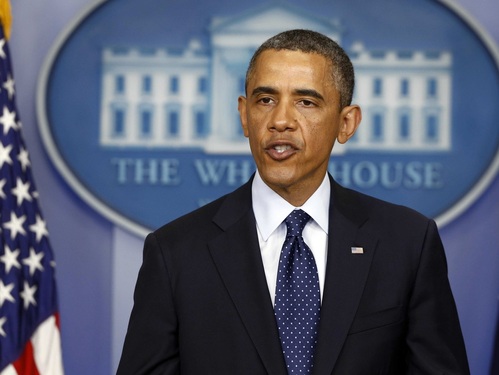 President Barack Obama
Millions of immigrants' hope to benefit from President Barack Obama's touted executive action through a pathway to citizenship has been dashed, if latest information on the president's maneuver around immigration is considered.
Latest information says the president's plan that has been targeted  to benefit about  11 million undocumented immigrants may have been scaled to just five million, according to  a New York Times' report that says the president plans will benefit about 5 million to discourage family separation.
People are saying coming just a week after the president said that America does not have the means to deport 11 million undocumented immigrants, and as such a pathway to regularizing their stay remains an option, and to now go as low as pulling only 5 million off the cliff out of the 11 million  raises a question about the fate of the remaining 6 million.

Observers say that the latest report may have put many of the 11 million undocumented  immigrants in jeopardy, and that they would not understand the reason for President Obama's dance around the immigration issue and for dashing their hope.
Some are saying the president is uncertain he is ready for any fight with the new Congress that will resume in January, with the Republicans in majority both in the Senate and the House, and that until he acts before one can believe reports from the grapevine.
The Republicans are already saying the president dare not pursue an agenda contrary to what Americans have expressed in the midterm election's defeat of the Democrats.
The president had said if the Congress refuses to act on immigration, he will use the executive action to tackle the immigration problem. Observers say the new Congress hasn't start or will not start deliberations until January, and don't see any rationale that will make the president pass over Congress without giving the Congress a chance. However, some people see the president's message as capable of forcing the Congress to do something than not doing anything at all.
However, judging from the Republican's Mitchell McConnell's words that the beginning of working together between the presidency and the Congress does not signal a good working relationship may be a reference  to the presidency's suggestion of using executive action to bypass the Congress, in spite of his party's loss in the midterm election.
This development over immigration promises a good show between Obama and the Congress, and Americans will sees who wins. But for the first time after the Democratic Party's loss in the elections, Senator Harry Reid spoke wrapped in humility, urging the president to tread slowly for the fiscal issues to be resolved before embarking on an immigration jamboree.
NEWS AND FEATURES
News & Features Around The World