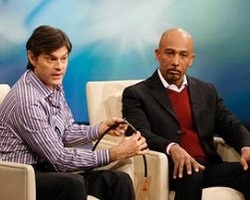 Dr. Oz and Montel
Watching Montel Williams and his daughter, Maressa, (diagnosed with cancer) in Dr. Oz's Show on Fox 5 in New York City is a reminder of the love parents owe their children. It brought to mind an event on a Number 2 Train in Brooklyn at the weekend, where a mother did everything humanly possible to shield a child's skin from touching the metal and other parts of the train, while he was asleep.
It is natural to see a parent whose child had been diagnosed with cancer near tears or tearful like Montel demonstrated on television with his beautiful daughter by his side. Cancer is dangerous and everyone knows the possibility of its end result and no parent will not wish it for a child. Merely hearing the 24 year old young woman saying she will lose her hairs is capable of drawing one close to tears. If there is anything anyone could have done for her to avoid the experience, she would probably have been free of the pain and the chemotherapy.
As the reporter watched the woman on the train shielding her sleeping child's chin with a piece of cloth to avoid contact with the train's metal, the question it raises at that moment is why is she doing that. And right there, the summation boils down to the love a father or mother can show a child: shield him or her from harm.
Ordinarily, allowing the child's skin to have contact with the train's metal may not constitute immediate harm. But when one considers that different type of people, whose state of health cannot be determined travel on the train, and the train is mostly home to different type of homeless in the night, it behoves any father or mother to protect a child from contact with the train metal to avoid unimaginable skin disease.
As you watch Montel talking to Dr. Oz about the history of cancer in the family, one's wish is that he has been able to avoid the experience and something done to save the daughter from losing her hairs. But since losing hairs is part result of the treatment to stay alive, cancer becomes like a monster one wishes never exists. It is what the woman in the train wants to avoid, whether cancer or an ailment less dangerous than cancer does not matter. She just does not want any harm for the child. All of her attention was on the sleeping child; ensuring that the piece of cloth between the child's chin and the train's metal did not shift and the moment it shifted, she quickly put her hand and replaced it.
Whenever the train's movement became rough, and people standing like her moved away from their spot against their wish, the woman fell on her three children sleeping in a space for two people. As soon as the train's movement was normalized, she repositioned herself and ensured the piece of cloth between her child's chin and the metal remained in place. It was all she did when she arrived at her final stop at President Train Station in Brooklyn, and walked her children home. No parent will wish for Montel and Maressa's experience.
But with the the love and concern Montel has shown for Maressa, there is every reason to believe that parental love and medical attention will see Maressa through this experience, survive and eventually regain her hairs.
HTML Comment Box is loading comments...
NEWS AND FEATURES
News & Features Around The World