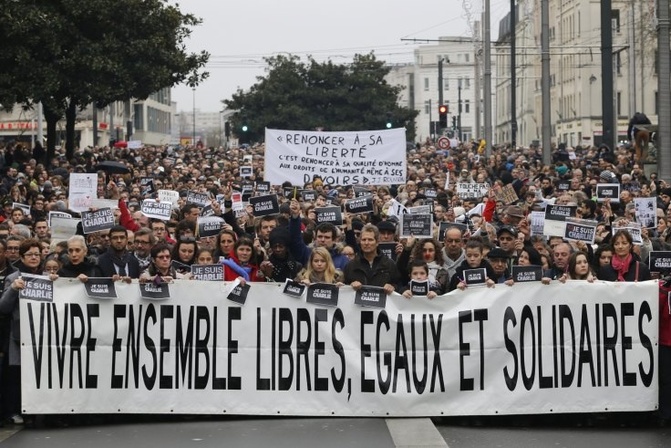 A rally I Paris against extremism (Courtesy: www.ibtimes.co.uk)
About 40 leaders from around the world were reported to have joined the French people in Paris on Sunday, in a show of support against acts of terrorism.
People came out in large number, leaders denounced terrorism targeted at freedom, people came out in large number, and seemed to have said "to hell with terrorism," with large turn out on the streets.
Another rally was scheduled in the United States like the one in Paris tagged 'unity rally', against terror targeted essentially at the freedom of speech and expression.
And France has officially declared a war, with the Prime Minister Manuel Valls' words on Saturday, in which he said France was at war with radical Islam.
The French government had called on Parisians to come to the streets to show a sense of belonging with victims and help reinforce the idea that republican values of free speech and freedom are the strongest defense against terrorism.
Events in France and the US for freedom's protection will remind music lovers of a popular song by Fela Anikulapo Kuti that says, "You cannot shut my mouth, my padlock is not in your hand. Let me say my own, you cannot shut my mouth."
As the rally in Paris was progressing, more information emerged about the terror attack on the newspaper house and the police in Paris. There appeared to be more terrorists involved than hitherto known. A female terrorist was being sought by the police, and there was a video showing one Amedy Coulibaly, talking about terror plans targeted at the French police.
Reports said Coulibaly shot four hostages at a supermarket on Friday, in solidarity with the terrorists who killed 12 journalists. He was also said to have killed a police woman the police had been trying to locate her killers and to know whether her killing was connected to the terror rampage.
In another development, London landmarks were reportedly  lit in colors of the French national flag in tribute to the 17 people killed in the Paris terror attacks.
NEWS AND FEATURES
News & Features Around The World