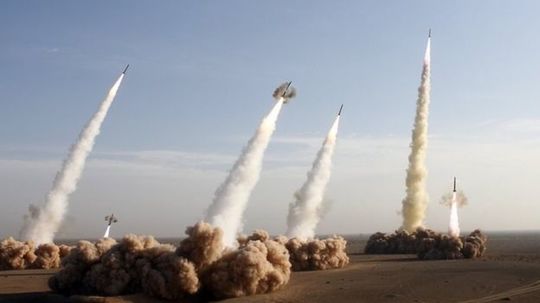 Photos of Iran tested ballistic missiles (courtesy:BBC)
Iran and North Korea have been testing missiles upon missiles, fired into the air and landing either in the sea or somewhere without confirmation. Testing missiles to attract the attention of the United States has become the past time of North Korea.
Now, North Korea has got an ally in missiles' testing, and no thanks to Iran's new found wealth and boldness, with Russia as a strong ally. Where is the U.S. in this, and especially, where is NATO in the picture?
The U.S. has been bogged down by its own domestic politics over the loss of an election. All that we hear about NATO these days is the U.S. asking its members to pay their fair share of the budget. of course, making NATO members pay more has been part of election promises of President Donald Trump
The current administration in the U.S. has said that it is with NATO, but that NATO members must pay their own fair of the organization's budget, because the days are gone, when the U.S. carries the burden. And yet the liberal population of NATO countries don't stop to bad mouth the new elected president of the U.S., allying with liberals in the U.S. Now that senseless political wrangling caused by liberals has bogged down the U.S, why can't other NATO members respond to Iran and North Korea madness?
Iran is openly calling the bluff of the U.S., because of what observers call its new found wealth and the country is ready to go the way of Iraq, challenging a power it knows it has no means to match power to power, but because of an only opportunity of wealth enhancement, and Russia as an ally, it thinks it has got what it takes to challenge the world's number one Super Power.
The swan song of "You have violated nuke deal" and I have not violated nuke deal has started. Rather than use its newly found wealth to take care of the people, its shooting and testing ballistic missiles and challenging a power it cannot successfully contend in warfare.
Openly, Russia has played the hardest type of craftiness to turn the U.S. politicians against themselves. Although, Russia has succeeded to a large extent, but Vladimir Putin certainly knows that the current confusion in the U.S. will not be forever and Russia will soon realize that what it has achieved in term of diplomacy and causing confusion in the U.S. is a phantom victory, unless the new administration in the U.S. decides to forget the past and embraces Russia to confront the ISIS. Since any lack of cooperation between these powers will leave ISIS with chances of survival and suffering minimal setbacks from attacks from individual countries fighting against it.
With the current U.S. government's to embargo any cooperation with Russia into the garbage over the turmoil at home, because of still to be confirmed allegations that Russia may have influenced Trump's election, Iran can continue testing its missiles until it gets into trouble and North Korea can spend all its budget on missiles, while the country's population suffer abject poverty.
NEWS AND FEATURES
News & Features Around The World