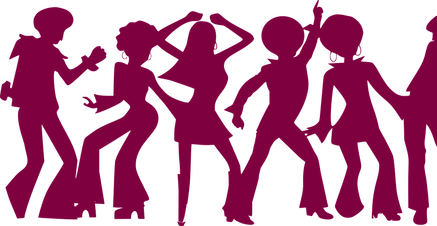 Dancing people (Courtesy:www.pixabay.com)
Yes, it is Easter Sunday. It is the day of celebration, the day that the Lord Jesus Christ rose from the grave after he was nailed to the Cross, pronounced dead and was buried. It was the day that he rose from the dead and he put his accusers and killers to shame, that (he) a stone that was rejected by the builder became the cornerstone. He proved that he was unstoppable and that no one could stop whatever the Almighty God had ordained.
This is a story of all stories that is greater than all stories. It is about one man's destiny to suffer, die and save the world. He knew it and he did not seek to abandon the hard decision but went headlong into its fulfillment. The birth had been prophesied before his conception and birth. His mother's conception was by the Holy Ghost. He was born in the manger and not in a palace. He did not belong to any royal house, but by the virtue of his destiny, he struggled and overcame the pitfall of poverty by identifying his destiny as a child of God, whose mission was to propagate the will of God.
Conception by the Holy Ghost? Yes, Holy Ghost. Meaning that the father, Joseph the Carpenter, never had any dirty encounter with Mary, his mother. The Bible said  that though, Mary was betrothed to Joseph as a wife, but by the time Mary was pregnant, Joseph was dumbfounded and was almost at a point of driving Mary away. Then, a great voice emerged and stopped Joseph on the path to lunacy.
Joseph was stopped from acting on his own will as a human being and the will of God became supreme, and we were not told that Joseph went about blabbing that Mary had cheated on him. Joseph took the development stoically. He overcame an experience that would normally have ended any marriage. Instead, he embraced Mary as being of one body with him, having being betrothed to him, fulfilling the word about marriage that a man will leave his father and mother and cling to his wife, and they shall become indivisible one.
The signs of greatness were there for him from birth. He was sought by people to whom God had revealed his birth. He was also sought by the King, who sought to stop him, and the reason his father and mother took the young lad and fled to Egypt to save the child from Herod's evil hands. Yes, the child grew in stature and in wisdom and he astonished all who heard him. He began a ministry that has become an endless Kingdom. His teachings about service and leadership is everlasting.
According to him, leaders are to follow and serve and not not to be in the lead and become proud. He also said that whatever anyone will become is God's decision to make and of his own or that of anyone to make. He told his disciples that whoever wants to step into his shoes should be ready to go through the same experience like him, and the time he said it he had not been arrested and the gory punishment and suffering had not started.
When he was eventually arrested betrayed by one of his own, and the punishment and suffering started, some of his own who had been the closest to him denied him and the cock crowed in remembrance of what he had told one of them that he would be denied! This confirms a popular a Yoruba that "Owo epo laraye nba nila" - (The hand of oil is what the worldly people licks with you). When the hands become bloody, people will elope.
Some Christ's disciples eloped following his arrest, but they resurfaced after his resurrection. Some believed he was the one who suffered, killed and buried, while other sought to convinced before they agreed he was the unstoppable phenomenon. He gave them power to continue his work, and the work has become an endless kingdom.
NEWS AND FEATURES
News & Features Around The World