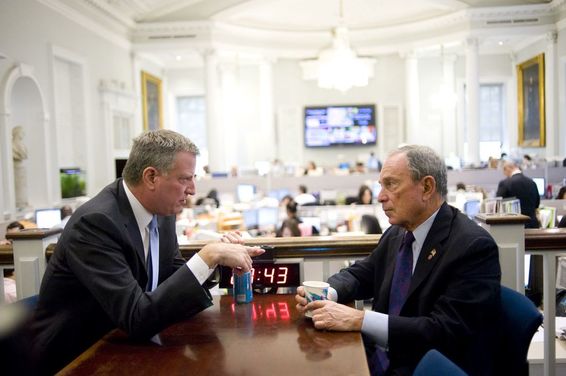 Mayor De Blasio of New York City and his predecessor, Mayor Michael Bloomberg. Both men have love for cigarette smokers, causing them to support legislation to discourage smoking.
Does the new York City's  Mayor Bill De Blasio really loves smokers? The question, and efforts to answer it, following the mayor's decision to increase the price for a packet of cigarette to $13.00 for city smokers, confirms politics as thrilling and that politicians like ordinary people, have their up and downs.
There are  times politicians in public office are highly rated in polls and times they are low, and they navigate the dangerous bends to forge ahead from low to high rating, and they also seek programs to help them get out of the woods.
Mayor Bill de Blasio of New York is not different from other politicians. He has waded through a period of investigations capable of denting his integrity as a public office holder and he has emerged without major bruises or with bruises still hidden.
Giving his unpopularity among his own liberal groups, the worst may not be over for him. But the mayor is struggling to get out of the woods. And there is not be a better way than revive the program against cigarette smoking in the city, to nudge his way back into contention.
The first time that the mayor first rolled out his displeasure against high rate of cigarette smoking population in the city was 2013. And his recent sudden dusting of the program from the racks attracted news headlines like "De Blasio Continues Crusade against Smoking" by New York Post, "De Blasio Attacks The Home Front In War Against Smoking" by Daily Caller, and  "De Blasio Continues Crusade Against smoking At Home" by Philanthropy New York.
De Blasio's crusade against smoking resurgence enjoyed so much coverage in the media enough for anyone to understand that the mayor is back from the land of the politically dead into the politically active world. And that he has chosen to use a dangerous and deadly enemy of the people's health to ride back reckoning shows his astuteness as a politician, and one who understands the need for corrective measure to undo political damages before another damaging period will set in.  .
Virtually all the news reports about De Blasio's decision to increase the price of a packet of cigarette in the city to $13 dollars as a way to discourage people from smoking noted that his predecessor in office, Mayor Michael Bloomberg, had his own crusade against smoking.From Bloomberg's uncompleted crusade, De Blasio began his own crusade in 2013, with the city council raising the age to buy cigarette to 21 from 18. After four years of silence about the crusade against smoking smoking, there is now a need to start the crusade again. What about the period of four years that the crusade was in abeyance? And why the sudden need for it to start again? Is it for political expediency? These are the questions that people are asking. No, the mayor and his supporters in their answer to the questions will argue that the new measure is a continuation of the mayor's  plan to reduce the number of smokers in the city and not that the effort has been placed on the shelf and has to be dusted for a new beginning.
People are saying that De Blasio is smart, but that he should not think that he can use what ails the populace as a ladder to sustain his own political life. Yes, people say the politicians use the people's life issues to come into limelight with promise to better their lot, but to later abandon the same people after getting into office. And that politicians will only do the thing to favor the people, when such things pleases the politicians and satisfy their political needs.
Edwin Castro, a security officer, resident at a location between Queens and Brooklyn Borough, said De Blasio's love for smokers lacks altruism. In essence, his decision, like that of Governor Andrew Cuomo, who has floated a promise for free college education education in New York State, is political and for political gain.
At worst, Castro surmises, smokers will make up the money to buy their stuff, and that the state will gain more money from the increase in the price of the packet of cigarette, because those addicted to smoking will smoke no matter the effort to discourage them. He said the worst would be for those who cannot afford the new price for a packet of cigarette to go to the Indian reservation for their cigarette needs.
It is noted that Mayor Bloomberg effort at taking decision for people about their overall health has not been recorded  is neither a success or failure. However, Bloomberg's decision to encourage legislation against sugar drinks in the state earned him an nickname as the Nanny Mayor, and people questioned his decision about deciding for them what to eat, what to drink or decision about their health.
NEWS AND FEATURES
News & Features Around The World