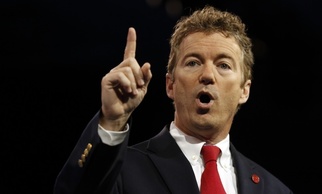 Senator Rand Paul of Kentucky
Senator Rand Paul of Kentucky has stirred the hornets nest. He is asking America to return to the days of Common Sense, the rule of law and the defense of the Constitution, against fears of getting killed. He is saying that he does not approve Americans getting killed, but that the NSA can do its job with warrants as demanded by the Constitution.
Paul's act is making people to ask if America is collecting telephone information of residents without a warrant, why wouldn't Nigeria's NDLEA jail a man in his house for six days without a search or arrest warrant, and saying it has extradition request from the United States?
Annoyingly, people note that there has been no response from the United States' embassy in Nigeria or the US foreign ministry, whether or not it is true that the US has a hand in the illegal jailing of Buruji Kashamu in Nigeria reliably for drug related offenses. People in Nigeria have said they are not against the arrest of the senator-elect if it is true he has been indicted on drug charges, but that the the rule of law be respected and not allow goons in Nigeria use America's name to commit illegality.
Is encroaching on individuals' home for any reason without a warrant an ideal of democracy and the rule of law? Why should we continue to booby-trap democracy, putting our own ideas to replace what should be ideals of democracy, because we are afraid of getting killed by terrorists?
The Patriot Act was enacted in 2001 by President George Bush, following the terror attacks on the homeland, all in the name of protecting Americans at home. The Act was renewed by President Barack Obama. It has been a case of trading liberty for security.
People say the fear of terror attack has made the defense of liberty a secondary issue to the defense of freedom. And by this,  they say terrorists have achieved a major aim of taking away the freedom and the rule law of America is known to have. They say terrorists have succeeded in in stilling fear on Americans. The debate in Congress over whether or not to renew the Patriot Act clearly shows the line of fear has made a large number of senators to embrace the Patriot Act, against Senator Paul' statement that enough is enough in the indiscriminate collection of Americans' records against the rule of law.
People have said that looked at disproportionally, the Patriot Act was enacted on the spur of the moment, without allowing time to look at its negative aspect or negation of the Constitution and the rule of law. The NSA can claim it needs tools to do its job to keep America safe, but that that tool should not be embracing illegality wholesale. if people are saying the NSA needs to be given an enablement to do its job without a recourse to issue warrants or that seeking warrants may delay their acting in time to safe lives, people have said let the process of getting the warrants be made easier for the NSA for the sake of the rule of law.
Senator Paul has spoken for all Americans, both who have voice and others who are voiceless. He has not said that the Act should not be renewed, but that the indiscriminate collection should stop, and that a warrant must be obtained before the NSA goes about knocking on anyone's door. It is about the law, respect for the rule of law and the Constitution. Paul is saying that illegality against innocent Americans is not what the NSA needs to pursue terrorists and make the homeland safe. Paul is not saying the nation should return to the mentality of pre-9/11.
He is saying that If following the rule of law is a mentality that endangers life, let the rule of law be scrutinized and see how it can be embraced without endangering lives, but not to live talking about the rule of law and doing something else.
People have been saying that the world is watching America over how America handles the ideals of democracy. If America becomes a country where illegality of collecting residents' information without a warrant, other countries will follow suit as has been witnessed in the case of illegal jailing of a senator-elect in Nigeria, where the NDLEA has used America's name to commit illegality and turning away six days later to tell the world it has been following the rule of law.
Well, America says it is following the rule of law, but it is at the same time collecting residents' information without warrants, why wouldn't any other country practicing democracy do the same?
NEWS AND FEATURES
News & Features Around The World