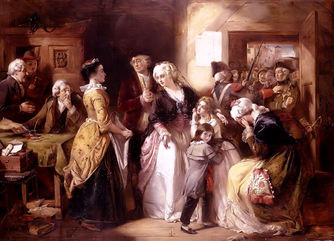 The arrest of Louis XVI and family, and attempt to flee to Varennes (Courtesy: Wikipedia)
Everyone wants to live in safe and secure environment. Ideally, it means no one wants to live in unsafe and insecure environment. Yet, there are sprawling unsafe and insecure environments than there are safe and secure and environments in most cities around the world.
Many of us grew up in colonised countries before independence and knew about the existence of areas called GRA. We all know that the GRA means Government Reservation Areas. They were the areas reserved for officers in the colonial governments.
These areas have cute houses, well tarred roads, lack no amenities, and safe and secure. When the colonial masters left, the educated elites, who succeeded officers of colonial governments inherited the GRA. In several cases across africa, these GRA have become homes to the rich and the wealthy.
Of course, no poor fellow, who lacks the money to acquire property in such areas can be found living there, since homeless people are not allowed there to desecrate the environment. The segregation in the human community between the rich and the poor, which began with the architects of modern governance, where they demonstrated their knowledge about the philosophy of governance to the people of other lands, who lacked  the knowledge of modern governance,  showed some acts in governance and its contradictions, which had survived in modern cities.
​   These contradictions led to the French Revolution of 1789. Louis XVI and his wife, Marie Antoinette lived large, while the populace lacked bread. It was the foundation of government and upon which successive leadership pattern had followed. Elected leaders and have their salaries and entitlements paid, while the needs of the ordinary people are slashed, whenever the economy slumps.
​(To be continued)
NEWS AND FEATURES
News & Features Around The World