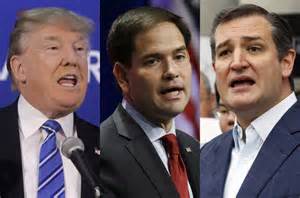 Trump, Rubio and Cruz
Hillary Clinton is under investigation by the Federal Bureau of Investigations, FBI. Donald Trump has a civil suit on his neck from the Trump University's closure case. Ted Cruz took loans from two banks, he reported one but failed to report the other. Marco Rubio, the new Sheriff in town is said to have credit card issues.
On Thursday, Trump's rivals in the Republican Party, made issue out of the party's front runner's closed university and the civil case arising from it, hiring illegal workers 12 years ago and inheriting money from his father.
Unlike the Republicans, Bernie Sanders, Clinton's rival in the Democratic Party, has said that he will not make the FBI's investigation of his rival a campaign issue. He has kept the promise. The battle royal of the Republican Party at the CNN's debate on Thursday evening was anticipated, but what was not certain was the form it would take. Trump's rivals and his party's bigwigs have been reported as bent on taken him down, to pave way for a candidate, whom the party may have anointed.
Spectators watched as the Rubio and Cruz shook hands behind Trump on the stage, Rubio signalling to Cruz with a body language that showed that there may have been an agreement between the two against Trump. Both took the fight to Trump in a desperate manner of losers working to dent the winner. But Trump stood his ground and he was unmoved, with slings from right and left. His height and standing between the two accusers and the toughness on his face showed a man ready for the worst.
Apparently, many spectators said that Rubio was doing the bidding of his financiers and his party's bigwigs, but many spectators were confused about what Cruz wanted by his Thursday night's alliance with Rubio against Trump. Rubio had been much against Cruz most of the time before the debate, and so was Cruz against Rubio. For the night, observers say both abandoned their differences to protect the Republican Party's establishment interest, and proving that in politics, there is no permanent foe or friend, but interests.
It is here that people talk about Rubio and Cruz doing the bidding of their masters, and one of the reasons they say Trump is resonating. They say Trump is self financing his campaign. Therefore, people say they believe that he will fulfill his promises, because they say he has no master(s) or financiers, who may be paying him and who may later dictate to him. Another reason some observers say they are for Trump is about his tax plans, and the tax plan is one of his plans that Rubio and Cruz are asking to explain how he will finance it.
Just as Rubio and Cruz struggled to rough him up with issues of  of the Trump University and his having hired illegal immigrants in the past during the construction of the Trump Towers, he still managed to squeeze messages about his tax plans, building a wall on the United States and Mexican border and the reason for it; making oil producing countries around the world finance their countries' needs, shaking up their trade imbalance between America and her trading partners, the cost of building the wall with Mexico and how he will make Mexico pay for it, bring home the money America is spending abroad to make and make the insurance business competitive to America great again.
"It is a civil case," Trump said about the Trump University issue. "If I want to settle it out of court I can do it, but I have chosen to allow it go the way it is going. He said he would finance his tax plans by curbing waste and fraud in the system. The plan to literally end his campaign on the debate podium on Thursday by Rubio, Cruz and their financiers has failed, making Rubio embarked on his continued campaign on Friday, calling Trump a con-artist and tying his words to the Trump University's issue.
People say that the Trump University's case is in court and Trump has not squandered the money from his father. The Christian Bible is not against inheriting money, but how the money is used, increased or wasted matters. And Trump has explained why he has not released his tax papers, with Romney as an example for releasing his papers in September. Trump is saying that releasing his tax papers will not take such a long time as Romney's.
Sandwiched between two young men who are desperate for the highest office in the land, reportedly backed by some financiers from failed Jeb Bush failed campaign, many people are sympathizing with Trump, having to go through a battle against special interests and moneyed people, who believe that America is in their pockets. Now, people say it will take money to challenge money, and they say Trump has become an instrument against the special interests and moneyed class in that wise.
Observers say that Americans are witnessing the dirty aspect of politics and the dirtiness of politicians. They say no politician is a saint and that voter  reserve the right to choose, whom to follow among the lots, just like Governor Chris Christie of New Jersey has done.
NEWS AND FEATURES
News & Features Around The World