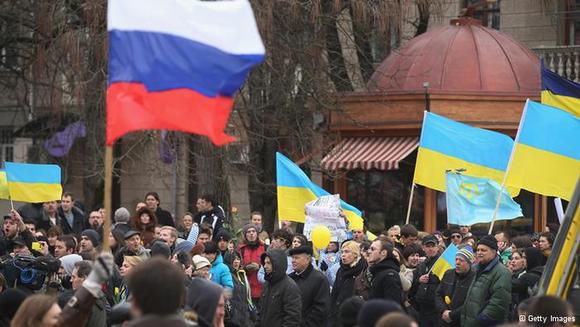 Ukraine flag stands amid Russian flags(Courtesy:www.dw.de)
Russia has expressed recognition to Crimea as an independent state.
People in Crimea had voted in a referendum to be independent from Ukraine. Over 90 percent of people who voted in the referendum held on Sunday favored secession from Ukraine.
Russia announced its recognition of Crimea as free from Ukraine amid announcement of sanctions by western nations against Russia, for being behind Crimea's decision.
Russian soldiers had moved into Crimea immediately after the Ukraine's revolution and the departure of Viktor Yanukovych from Ukraine. The US issued a warning to Russia that any occupation of Ukraine is unacceptable and will attract a cost. But President Vladimir Putin had said that Russian soldiers' presence in Ukraine was a response from the Crimean people for protection.
The world had witnessed development in Crimea as the people welcomed Russian soldiers who barricaded Ukraine's Army barracks and the election of a new leader in the Crimean Parliament, before the announcement of a referendum.
Observers viewed the referendum as a rubber stamp of Russian government's decision on Crimea, following events in Ukraine that were unacceptable to it and expected Crimea as part of Ukraine to become history after the referendum.