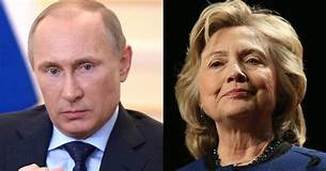 Vladimir Putin and Hillary Clinton
Many Americans have been waiting anxiously to hear the news of the confirmation of the alleged collusion in the 2016 election between the Trump Campaign and the Russians. But the information news reports have been feeding Americans is of some other crimes different from collusion and they are hearing of some other plans to drag Donald Trump down at all cost.
Anything can happen to us as humans. We rise and fall. And there are times that some of us are fortunate to rise and they stay steady on their feet. This applies to all human beings, whether Americans or Indians or Chinese or Africans.
We are in a life of dirty competition for survival and ego demonstration. It is why up till today, no one can explain why poor and powerless Africans became victims of slavery, sold by their own powerful chiefs and kings to some people more powerful than them.
The chiefs and kings may have been overpowered by more powerful traders asking for slaves at all cost. It still shows that when you lack power or you have it, but don't use it or don’t know how to use it, the less powerful around you will use their own powers to upstage you.
It is about a war that we call ‘competition’ in which there seems to be no fairness, but which we ascribe fairness anyway. American Democrats think their war against President Trump is their own war alone. They cannot see that they have unknowingly join forces with the Kremlin against their own country and helping Putin to achieve his dangerous aim against America.
They have unwittingly chosen to aid Vladimir Putin in his efforts to desecrate the American democracy. They began by accusing Trump's campaign of collusion with the Russians, because computers at the Democratic Party secretariat were allegedly hacked, information from only God knows where published by Wikileaks and Trump won the election. There is information about a beef between Hillary Clinton and Putin. But no one has bothered to investigate whether the beef between the two could make Putin go after destroying Clinton's chances in the elections as the Russians were alleged to have done.
Apparently, there has been no prove of any collusion between Trump and the Russians, and yet the Democrats and other Trump adversaries are going all the way to look for other ways outside the collusion accusation to drag Trump down. In this case, people are saying Putin will be the winner. But the Democrats are careless.
Curious observers, who have followed the 2016 election and the results and development after the election have said that Putin has succeeded in getting Americans to come against one another. People are now saying that the real sin that Trump has committed against the Democrats is not that he colludes with the Russians, but that he has defeated the Democrats’ dynasty in the election much against their expectations.
Note one thing that Trump is still on his feet. People are saying he may and may not may survive the Democrats’ plans to destroy his administration. And whatever happens, it is being said it will be remembered that one man named Trump has defeated the combined American dynasties on the right and the left in an election. The dynasty on the Republican Party has since accepted their defeat, but the Democrats’ are working hard to tell Americans that to defeat their own dynasty is an unpardonable sin.
And now that the Democrats are jockeying towards the embrace of Socialism, Putin will at the end of the day say he has got America, and that he has succeeded at destroying America, its capitalism and pride. And If these dynasty worshipers have their ways, the loser will not be Trump, but the American voters. But who cares whether the Democrats could succeed in their plans to get Trump out and for Mike Pence takes over. The Republicans will still be in-charge, and that will embolden them to work harder for Pence's election for another four years.
At the end of the day, there will be many spoilers beginning with the Russians, the FBI, Robert Mueller and his investigating team -  information says his work will influence the midterm election in favor of the the Democrats, and the Democrats - for trying to force Trump out at all cost.
HTML Comment Box is loading comments...
NEWS AND FEATURES
News & Features Around The World