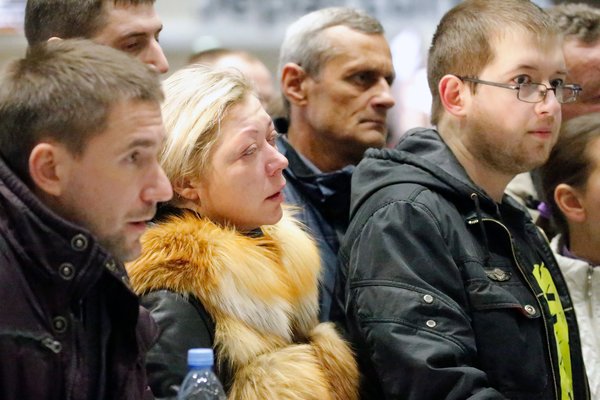 Family members of the affected passengers in the ill fated airliner (Courtesy: nytimes.com)
Russians are mourning the loss of 224 in air crash of Saturday, the last day of October, 2015. Russians are in sorrow for the loss of human lives and not the loss of the aircraft. The magnitude of  loss and the palpable sorrow are unquantifiable and this may explain the reason the Russians diplomacy has run into a logjam of confusion.
How can one explain the rationale behind Russia's explanation that the air crash of its commercial aircraft in Egypt may have been caused by engine failure or an attack by the Islamic State of Iraq and the Levants, ISIS, when the ISIS has accepted responsibility for the crash?
Here is a version of the New York Times' report of the crash and the ISIS acceptance of responsibility: "O Russians and whoever is allied with you, know that you neither have safety in the lands of Muslims nor in the air, and that killing dozens everyday in Syria by the bombardment of your aircraft will bring calamity on you."
Many observers are as much confused over what they see as Russia's confusing diplomacy.. They are asking about what Russia stands to gain playing the Ostrich with the loss of 224 innocent souls. They are saying that if the ISIS has not openly accepted responsibility, Russia's speaking in both tongues that mechanical problem or an attack may have caused the crash may have been acceptable, but not with the quick announcement of the ISIS's announcement of responsibility of the evil. Some people say it is like Russia is hiding from the fact it is in a war in Syria and that war has its repercussions.
People easily remember that just recently, Russia bombardment of ISIS positions in Syria was in news reports, and that when the friends of Bashir al Assad's enemies accused Russia of bombing freedom fighters' positions, Russia said it was carrying out attack on the ISIS's positions. Rather that weakening the ISIS, the Russian bombing campaign to save a drowning Assad, rather that ask him to get out toward a final solution in Syria, has obviously led to the death of 224 innocent Russians, who may not have been part of the Russia's decision to side Assad continuing defiance of common sense, than ask him to abdicate..
Now, people are saying that with the ISIS's seeming demonstration of capability to engage in dirty air clashes, other countries fighting in Syria in support of other combatants against the ISIS may have as well been put on notice that their continued engagement is endangering to their citizens' lives on journeys around the world. Apparently, it is not only Russia that is mourning. but the entire world, because it is humanity that is in danger of destruction. Over two hundred people were killed in the air, when pro-Russian fighters in Ukraine shot down a Malaysian airliner. most of the victims were Dutch. Now, Russians is receiving the same treatment.
No one is certain about where the ISIS will strike again. Humanity is in danger. Traveling has become a source of worry. An airliner went down between Malaysia and China. Hundreds of souls lost and no one knew the cause of the crash to this day and no single soul recovered.
NEWS AND FEATURES
News & Features Around The World