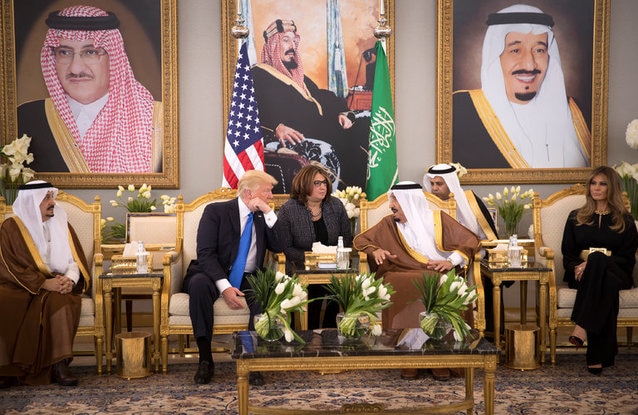 President Donald Trump and wife, Melania and his hosts in Saudi on Saturday (Courtesy: NYTimes)
President Donald Trump begins his first foreign trip on Saturday, arriving Saudi Arabia on red carpet treatment after he was welcomed at the airport by the Saudi leader.
The foreign trip, which is expected to also take the president to Israel and Italy, starts amid scrutiny at home over allegations of Russian interference in the election to favor Trump.
The media in the U.S. are devoting almost equal space for the coverage of the president's visit abroad and the investigation at home, with litanies of unconfirmed allegations that Trump told the Russian envoy he had taken the pressure off him with the firing of James Comey, the former FBI director and that Comey was a nut job.
Before the latest information about the president's alleged statement that Comey's firing has taken the pressure off the administration and that the former FBI director was a nut job, Comey was said to have said that he had a memo in which he recorded Trump as having told him to let go Flynn's investigation and that had been read to mean an attempt to influence the FBi director and the investigation into Flynn's involvement with the Russians.
The liberal media that has been at loggerheads with the Trump administration before his election is agog with reports there may be enough information capable of leading to obstruction of justice against Trump. But curious observers say there is a need for caution, because there has been no information about tampering or destruction of evidence to cover up.
The allegation of Russian interference in the election is as old as the Trump administration, but there has been no single evidence to prove the alleged interference. The call for investigation by the opposition party has become so loud that observers can see the pressure it has brought on the young administration by the attention given to the issue by a section of the media, and that it is possible that the firing of Comey may have lessen the pressure among administration members, especially the president who have said time and time again, that the allegation of Russian interference to favor his election does not exist.
However, the Republicans in the Congress are behind the president. Though they encourage investigations into the alleged Russian interference in the election, but they refuse to support strident calls for impeachment, without evidence of allegations about Comey's memo recording.