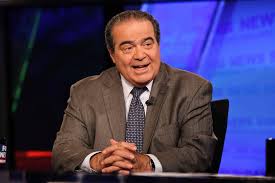 Justice Antonin Scalia
Justice Antonin Scalia of the United States' Supreme Court has died at the twilight age of 79. He was reported to be one of the Conservative members of the Court. He is yet to be given the expected befitting  burial for his meritorious service to the nation, but the issue about filling his seat has taken the front bench, with the White House and the Republican Party's campaigning presidential candidates already in a spar.
The first thing many people will remember on hearing about the death of this legal luminary is about how his name loomed large among his peers as if he was the only one that constituted the lordship of the Court. Observers believe that when a judge dies, he will be replaced since his seat will not be left vacant forever, but that the political divide about filling a seat left behind by a departed judge as if the Court is a venue of influence peddling is nothing short of scandal.
News reports said that President Barack Obama said that he would make a replacement. Is it not natural or part of the process to make a replacement, when a member of the Supreme Court dies and the seat is vacant? Does the president even need to make a pronouncement that he would make a replacement, since the Constitution says he should appoint a replacement  and for the Congress to approve or reject his replacement ? And why do the Republican Party's presidential candidates, who are very busy on the campaign trail, think that the president should leave filling Scalia's vacated seat until after the elections? These are the questions that the reported president's and Republican presidential candidates' spar over the filling Scalia's seat has raised.
Scalia is reported to be favorable to Conservative ideas. It does not mean that he influences the Court to follow any idea or allowed his his Conservative beliefs to influence his judgment,, since the decisions of the judges are mostly based on the Constitution and the truth of the case before them. Why then should the argument arise that the Republican Party and the Democratic Party wants to have a higher number among judges of the Supreme Court?
The answer is simple. The democratic Party wants to appoint a liberal judge to influence its cause in the Court and the same is applicable to the Republican party. Observers say it is how the game is played politically. They say everything are politics, meaning that everything have been politicized, including decisions about the safety of the water we drink,and the air we breath, but safe that the politicians have no power over the air we breath.
The other day, the world hear about an american city, where the water has been polluted. But one of the presidential candidates had quickly went on the air and described the water issue as a human right matter, while others called for the governor's resignation, because the governor of  the State of Michigan, where Flint, the city that has polluted water is located is a Republican party governor and the presidential candidate who talked about water as a human rights matter and others calling for the governor's resignation belong to the Democratic Party.
The presidential candidate and others against the governor failed to remember that it is not only the state government that is responsible for the delivery of clean water, but that a federal agency, the Environmental Protection Agency, E.P.A, also plays a role, and that at that particular point in time, no one was certain of the government department to be held responsible. Observers had said that all that was needed at that time was for all the people to join hands and ensure a quick return of clean drinking water to Flint, rather than seeking a scapegoat in the name of politics.
The question that the reported sparring between the White House and the Republican Party presidential candidates over the filling of the seat left behind by Scalia is whether there is still fair justice in the court that is not influenced by politics and political ideology.
NEWS AND FEATURES
News & Features Around The World