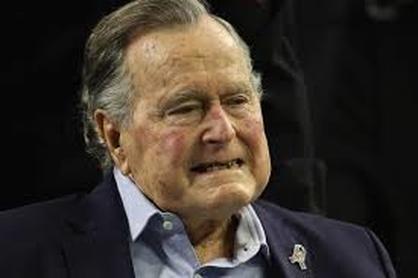 A victim of alleged touching several years ago, while he was in office as president.
"Don't look or behave like you don't see" is an attitude I have developed anytime I am out with my wife. I also always pray that any lady, whether beautiful or ugly, does not appear before us. If it happens, I have to behave like I don't see or cannot see, because I know that my wife will complain of a man with roving eyes.
A man can manage accusations coming from his wife, but not accusations coming from ladies talking about the way you may have touched or eye them. There are time happiness of the position a man occupies compels him to touch people around him, but it is said to be inappropriate to touch ladies on parts of the arm or legs.
Agreed that this is an American culture and those who break the rules are believed to have demonstrated unforgivable and punishable sins. It may not be so in other lands. It is why it is important to ask questions about do's and don'ts anytime one is traveling from his base to other lands he barely know about the culture.
It is taught in Sociology classes in many colleges across the country that what is applicable in term of culture may be a strange phenomenon in France and what is applicable in term of culture in China may not be the acceptable norm in China. It may be acceptable for a woman to accuse a former president in America of inappropriate touching in a public fora, such may be acceptable in Nigeria or South Africa.
The South African President Jacob Zuma is married to several wives. It is the height of polygamous life, a trend not acceptable to public office holders, especially the president, in many countries. It is acceptable that there is something specifically wrong with men who masturbate in public places to show affection to the opposite sex.
There must be also something specifically wrong with a society that accepts announcement of any wrong committed by a man against a woman several years ago, because someone comes out to allege harassment or rape, and no room is allowed for each case to be examined and judged on their merit.
If a man makes advances and a woman refuses such advances, what sense does it make to assail the public with stories of exchanges between them? Is it to convince the public that the man is what he has been called? Perhaps, there is no case of the culture of the female bottom power in America as known to be the case in other cultures.
And if the culture of the bottom power exists in America, stories about where women have used their power toward achieving breakthroughs are not told, unlike the cases of where the man forcibly makes the woman to give something for what she wants. Both cases are bad for the society, because it tends toward corruption and alienating people who cannot use their feminism to get what they want and men giving advantage to ladies they can cajole.
​
Comment Form is loading comments...
NEWS AND FEATURES
News & Features Around The World