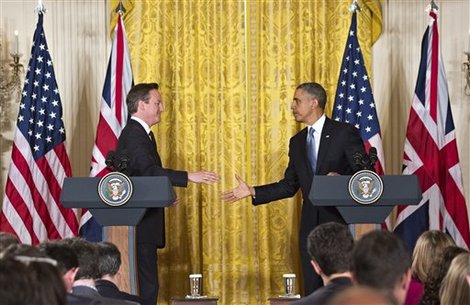 David Cameron and Barack Obama (Courtesy: AP )
Within a month, the world has witnessed killings that make people raise eyebrows and concerns. First, it was Egypt. Now, it is Syria. Over 900 souls were killed in Egypt, because some set of hand-picked rulers wanted their personal decision be law. In Syria, a chemical weapon was reportedly deployed leading to about 1300 deaths.
No one has claimed responsibility for the Syria’s act of terror. Ironically, it was the second time chemical weapon had allegedly been deployed in Syria that both sides in the Syrian war denied responsibility.
The world stood by and watched General Al-Sisi and his co-travelers in Egypt visited evil upon souls, whose sin was seeking respect for their wish in the scheme of affairs. The world does nothing to sanction the thugs in Egypt that have commandeered the State House to themselves. But in war torn Syria, the world wants repercussion for deployment of chemical weapons, which it is uncertain who has done the deployment, in the usual manner of taking side in a war, for which humanity ought to play a neutral role.
It is quite alright to frown against the deployment of chemical weapons. But before ascertaining who may have deployed the chemical weapons, and world powers say they want to hold a particular side they don’t favor in the war responsible raises another cause for concern. The warning by the United States and Britain to Syria, threatening serious response if it turns out Syria is responsible for the act, falls short of expectation from world
powers, whose act should portray a wish to help in fostering the rule of law, far away from their own shores. What they say means that if it is the freedom fighters that have deployed the chemical weapons, the show can continue. What will happen if the world discovers that the freedom fighters are the culprits?
President Barack Obama and David Cameron need to rethink on this issue. Instead of threatening Syria if it turns out it is responsible for the deployment of chemical weapons, they should have threatened that whichever side in the war found to have used the chemical weapons will be dealt with. The reason is that there are two sides fighting in the war. The U.S. and Britain no doubt are on the side of freedom fighters. The two countries have been exercising restraint in having their boots on the ground in Syria for several reasons, but majorly for reports of Al-Queda’s neck-deep involvement in the Syrian fratricide.
Without the Al-Queda’s confirmed involvement in Syria, it is doubtful if the U.S. and Britain would not be fighting along side freedom fighters there. If the U.S. and Britain want to avoid a fight along side those they call thugs or do anything that will benefit the thugs in the long run, would it make sense doing anything that will favor the thugs based on evil deployment of chemicals that its source is yet uncertain? It is a good development that Syria has
agreed to allow the UN inspectors immediate access to investigate the source of the chemical weapons’ attack near Damascus.
The world has not forgotten the U.S. and Britain’s hurried journey into Iraq on the pretext that Saddam Hussein had weapons of mass destruction, under George W. Bush and Tony Blair, which turned into a ruse. Pertinently, one will expect nations under the rule of law to avoid partial decisions that will make the world see the semblance of thugs in us, joining fratricide to support one of the combatants.
Meanwhile, Egypt’s crackdown, now an order, enjoys support, despite threat to sanction El-Baradei for resigning as vice-president, in protest for the death of 900 Egyptians.