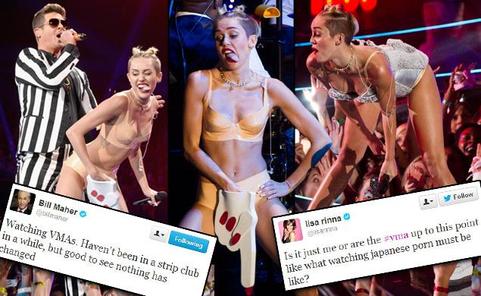 Part of the show Sunday night at Barclays Center in Brooklyn. (Courtesy: New York Daily News)
Music lovers were shocked last night watching music stars at the MTV Music Award went beyond singing and dancing and to theatrical performance. They were all about singing, dancing and steaming show.
Television reports showed people with mouths opened at what they saw on the stage at the Barclays Center in Brooklyn, the venue of the show.
There was Lady Gaga with her usual eye popping trade mark performance.
But the show that actually move people at the center that has become talk of the town is the duet by Robin Thicke and Miley Cyrus. It is the show that ignites tweets and comparison of the show to a strip club.
Observers say people pay to watch dancing and singing, but get more than their ticket worth. They see performers removing their dress on stage and dance that is a replica of a strip club performance.
Whether a strip club performance, singing and dancing, all are entertainment. It is all about performers who try to outperform others and win awards, observers say.
Some say it is lewd. Others say entertainment is beyond singing and dancing, and that other side attractions could not have been unexpected, in a world where performers have said in the past that  there is always a need to add something extra when singing to get the public hooked.
People go to strip club. Don't they. Others say the argument is not about whether people go or don't go to strip clubs. The argument is that people who watch the show at the Barclays Center last night may not have mean to go to a strip club and there may have been many people who never been to a strip club in the crowd, whose aim may have been to listen to good music and watch good dancing.
Others counter that there is nothing like a bad dancing. They ask whether there are people who don't see people in swim suits or see people hugging and kissing on the streets.  And what about people walking almost naked in summer. They say the difference is that Miley Cyrus came on stage dressed, but later removed her dress and still was not naked.
But they agreed that Cyrus did a steaming dance with Thicke. They unwittingly promoted what happens behind the curtain in strip clubs;  people who don't know what happens in strip clubs will now know, and helping the strip club's business to increase clientele.