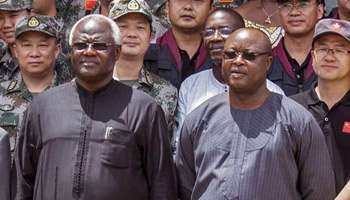 President Koroma and Vice-President Sumana (Courtesy: www.jauneafrique.com)
Sam-Sumana is the vice-president of Sierra-Leone and a member of the ruling party, All People Congress, APC, until last week before his expulsion. This weekend, information emerged that Sumana had gone into hiding, because he said he heard that soldiers had surrounded his home.
But one development that raises curious observers' attention is the information in BBC's report that Sumana put himself into quarantine for 21 days two weeks ago following the death of one of his body guards from Ebola.
Obvious that Sumana's first fear arose from Ebola, before he found that something worse than Ebola or something like Ebola was getting closer. "I don't feel safe this morning as vice-president," the BBC quoted the vice-president in its report, based on an AP report.
People are imagining that the vice-president no longer felt safe in the APC, when he began a solo political journey. No, the guy wasn't traveling solo politically. The news said he was alleged by the ruling party to be forming a new political party.
There is no way to confirm if indeed Sumana's driver died from Ebola last week as news reported. But why only Sumana in quarantine following his driver's death and not his wife and children and others close to the driver in Sumana's household? Could Sumana have used Ebola's quarantine as a cover up for political quarantine in a bid to form a new party and avoid a backlash from the ruling party?
Crying out of not feeling safe as a vice-president one week after he began Ebola quarantine, and still having one week to complete the Ebola quarantine leaves room for suspicion that Sumana's claim to have gone on Ebola quarantine may have been for reasons more than Ebola quarantine, because people say when picking on a dangerous political battle to unsettle a party against expected allegiance, it not only endangers the politician, but the party as well as the country's politics are endangered.
Well Sumana reportedly phoned the United States' Ambassador and waited for a response, but the ambassador's spokeswoman said embassy officials saw the news of Sumana's plight, and said there was no action in the embassy about it. However, the country's information minister, Alpha Kanu, confirmed that soldiers were in Sumana's house to help his quarantine, against information that the soldiers were dispatched there to withdraw Sumana's security details.
But people have asked whether the government need to send a large number of soldiers to withdraw security details, an act that can be carried out with a simple order from the above? An answer to the question shows that something sinister is happening in Sieria-Leone's political firmament, requiring more information about Sumana's decision to abandon his party.
President Bai Koroma and Sumana have traveled together on Sierra-Leone political terrain from their first election over four years ago as president and vice-president respectively. What could have suddenly gone amiss?
NEWS AND FEATURES
News & Features Around The World