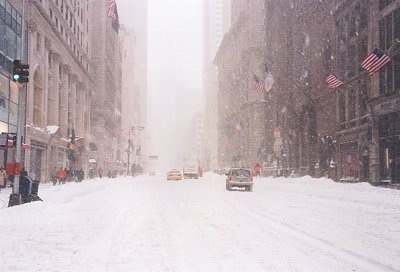 Cities in North East may look worse than this on Tuesday
You know it will come, but the day it will come is what you don't, until the weather men on the television give their revelation. I am talking about the snow storm. When you live in New York City or anywhere near the North East in the United States, you cannot escape the snow storm experience in winter.
It is seasonal. It puts the government, people in public authority and the people, all over the area at alert. No one wants to be caught unprepared. People go to the stores and purchase essential needs to be stored away for emergency. Government releases information about how it is handling the coming of the storm to avert terrible experiences.
Snowing ordinarily don't stop people from going to work. but as a storm with a wind guzzle capable of uprooting trees, the government may have no choice than shut down the entire system. It is a war. And the war has since begun a day to the beginning of the storm. The news says about 6000 flight have already been cancelled. Schools have been closed. A newspaper, 'Metro' published in New York City calls it "Snowmaggedon". Another news source calls it "Ninobeaster". The New York Times reports "Travel ban in North East as Region Braces for Blizzard". New York Post says, "NYC braces as blizzard whips the city".
The snow will be coming up to 24 inches on the ground. And it will pack a wind of 60 miles an hour. It started early on Monday at about 0630 am. It is on the ground and it is windy. But people still leave home to work, and people are returning home from work, because the transit system is still operating. From 1900 hours, the New York City says the transit system will run on limited basis and will be shut down completely by 2200 hours, and individual cars - including cabs - are advised to be off the road, because the real snow war will begging from midnight, when it is expected to rain cat and mouse of snow, accompanied by a terrible wind. and the transit system will not return until Thursday morning.
This means that people who have found their way home cannot return to work tomorrow morning, and those at work who cannot return home tonight are to remain wherever they are. Monday, Tuesday and Wednesday: Three complete days of uncertainty. Some people hail the city for taking precautions to save lives and properties. They cite past experiences and that the city and the people should not caught unprepared by the snow monster.
Some others say shutting down the entire system is overt, and that the snow could be monitored to reduce transit operation based on severity of the storm. They say there have been times when weather forecasts have failed to measure up to what are revealed, and forecasters themselves say such could happen, when there is precipitation.
However, everyone seem to agree it is good to be on the side of caution, While some are returning home early to avoid getting cut off by imminent transit shut down. "I have three children. My husband works as Super in another building and my children are young and cannot leave them alone without someone to watch over them, a woman confides as a reason for returning home early from work. One man says that he has forgotten his medications in the house and cannot visualize how he will survive without them. But he bets that the weather will not be as maddening as people anticipate. "I know cabs will run on Tuesday, if the transit shuts down, and I will get home for my medications on Tuesday."
NEWS AND FEATURES
News & Features Around The World